Tim Sweeney Blunders During Epic and Apple Trial: 'I am Not a Switch Player'

During the trial between Apple and Epic Games, Tim Sweeney, the founder of the video-game company has committed a surprising blunder. He unsuccessfully plugged the Nintendo Switch controller to prove that it's easier to play games on smartphones rather than the said gaming console. 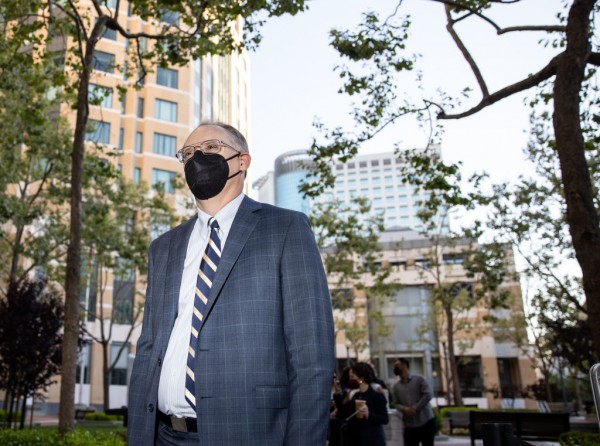 (Photo : Ethan Swope/Getty Images)
OAKLAND, CA - MAY 04: Epic Games CEO Tim Sweeney arrives at federal court on May 4, 2021 in Oakland, California. Apple and video game maker Epic Games are appearing in court to determine if Apple is running a monopoly in its Apple App Store and whether the company should be allowed to take a 30 percent cut of revenue made from purchases on the platform.

Bloomberg was the first to report on Wednesday, May 5 that the Epic Games founder and businessman, Tim Sweeney has encountered a console mistake during their legal fight against Apple in a court.

During his testimony, Sweeney has failed to plug the controller in the Nintendo Switch console. While it was a simple error especially for the beginning users of the Japanese gadget, this proves that he is not well-versed in using it.

The stance of Epic deals with the controversy about Apple's App Store being a gaming monopoly. To win the antitrust lawsuit, the company needs to prove that the Cupertino giant is restricting its users when it comes to playing games across several devices which include Apple's iOS smartphones.

In connection to this, the lawyers from Epic Games have presented a Nintendo Switch console and an iPhone. Sweeney would show that playing a game on a smartphone is much easier compared to the on-the-go handhelds.

When he was traveling, Sweeney stated that he previously used a mobile phone in gaming. However, he said that there is still a need for the two devices and Wi-Fi to play games on Switch aboard the train.

By the time that the Switch was in his hands, he plugged the game controller onto it, but it went unsuccessful.

"As you can see, I'm not a Switch player," Sweeney said after committing a blunder in inserting the controller into the console.

Yvonne Gonzales Rogers, the US District Judge replied that the whole world knows that Sweeney is not really a Switch person. She added that she's also not used to playing it.

We only hear in some thriller-detective films that the courtroom dramas are growing unusual. For an instance, the judge will request a representative from a party to correctly identify the items which count as a piece of important evidence in the case.

This is what happened to Sweeney on the first day of the trial on Monday, May 3. Kotaku reported that the Epic CEO was ordered to do the same thing to a group of gaming consoles.

The trial between Apple and Epic led Sweeney to specifically point out the item and tell its description. This counts as a basis of the judge in weighing the case involving the two tech giants.

Luckily, Sweeney has succeeded in recognizing the video game consoles in the first-day proceedings. From the audio recording, the judge told him to distinguish PX-2777 from the rest.

Here's the exact transcription in the audio:

"It's the Xbox series X"

"It's the Nintendo Switch".

All three answers were correct. The case proceeds.

Related Article: Epic is Suing Apple for Welfare of All Developers, but Admits Willingness to Accept Special Deal