Epic Paid Developers Over $11.6 Million for 38 Games Released for Free

Epic Games reportedly paid developers over $11.6 million to give away their games for free to lure new users following the launch of the company's own store in December 2018.

The reveal comes as part of the Epic Games versus Apple Lawsuit, alleging the iPhone maker with antitrust practices that began on Monday, May 3.

A document surfaced in the wake of Epic Games versus Apple Lawsuit, which shows how much the video game publisher spent on free games for its store's launch.

GameDiscoverCo's Simon Carless posted a tweet on Monday, May 4, which reveals how much Epic Games Store paid developers for the 38 games given away from December 2018 to September 2019.

Want to know how much $ the devs of those 'free' Epic Games Store games got, & how many copies were grabbed? Here's the first 9 months to September 2019. 👀 pic.twitter.com/5hkLb1VEjj

The document shows that Epic Games' decision to persuade developers to turn their creations into free games resulted in about five million new users. This translates to Epic Games paying the developers an average of $2.37 for each new user it brings to the store-an amount the company would easily make back if each user buys at least one $20 game.

The list, however, does not cover all of Epic's free games since it launched its store, as well as the company's biggest giveaway when it released "Grand Theft Auto V" in May 2020 for free.

Epic Games CEO Tim Sweeney admitted their business practice on Apr. 11, when he answered a tweet and said that they pay developers a flat fee to give away their games, as opposed to paying them per download.

The numbers are right there.

Most free games are free for a week, some are free-to-play.

Our free game giveaways are negotiated with developers where we pay them an agreed dollar amount, not per copy.

The amount developers received for their games vary, as the document showed Epic Games paid around $1.5 million for the "Batman Arkham" trilogy games, $1.4 million for "Subnautica," and $1 million for "Mutant Year Zero."

The Epic Games versus Apple Lawsuit started with Sweeney alleging the iPhone maker taking an unfair share of money from software developers.

According to Wall Street Journal's report on May 3, the "Fortnite" developer purposely violated Apple's App Store rules to prove the point. 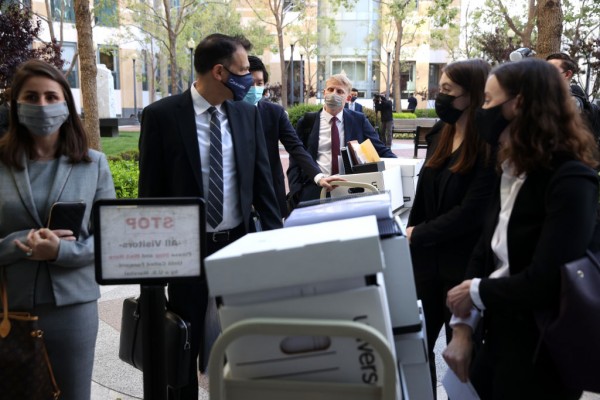 (Photo : Photo by Justin Sullivan/Getty Images|)
OAKLAND, CALIFORNIA - MAY 03: Legal staff for Epic Games push a cart with boxes of paperwork into federal court on May 03, 2021 in Oakland, California.

This prompted Epic Games to file the anti-trust lawsuit that would bring together execs to stand as witnesses on the trial and could change the multibillion-dollar industry distributing apps on mobile devices.

Related Article: 'Fortnite' Maker Still 'Firm' in its Decision to NOT Go Back to Apple, Over 30% Commission Direct Payment