Singapore required Facebook and Twitter to notify its users that the statement claiming that there is a new COVID-19 variant from the country is not true at all. The two social media platforms have responded and said that they are legally bounded to comply.

Singapore's ministry of health said, on May 19, that it is aware that a misleading statement has been spreading on social media, Reuters reported. 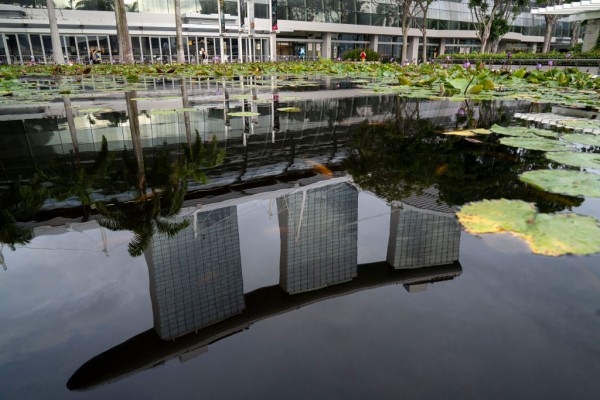 (Photo : by Ore Huiying/Getty Images)
SINGAPORE, SINGAPORE - JULY 07: Marina Bay Sands Hotel is seen reflected in the pond at the Art Science Museum on July 07, 2020 in Singapore. Residents will go to the polls to elect members of parliament on July 10.

The Origin of the Non-Existent 'Singapore Variant'

The false claim stated that there is an unknown variant of COVID-19 that first appeared in Singapore. The statement also warned people of the risk of it spreading in India -- which is now crippling from the effects of a different strain.

It was a result of Delhi Chief Minister, Arvind Kejriwal's tweet. He wrote that a new virus that came from Singapore is harmful to children. He then urged to ban flight from the alleged originating country, CNA reported. Hence, news agencies and posts on social media have cited the said tweet. The third wave of infections in India has, as well, been warned in the tweet, CNA said in the same report.

In a separate report by Reuters, both Singapore and India have strongly criticized the Delhi Chief Minister, since March.

In other related news, A Harvard study, in February 2020, commended Singapore for its COVID-19 detection system. A Tech Times report even expounded on how the country has built the gold standard of contact tracing.

Facebook confirmed to Reuters that it has received the order. As such, the company is "legally compelled" to notify its users about the said false information spreading.

Starting May 20, users are now welcomed in their news feed with a prompt that reads: "You may have seen info the Singapore government has determined to be false. Facebook is required by law to notify you." Below the written notice, users have an option to "See Govt Notice."

Twitter, on the other hand, has also confirmed to CNA that it has reviewed the "request" of Singapore. The company added that the said request will be granted as it is under the law of the country.

"In-line with our values around openness, transparency and trust, this request will be reflected in Singapore's section of the Twitter Transparency Report, which we publish twice-yearly," Twitter said in a report by CNA.

Users of Twitter in Singapore are now prompted by a "legally required Tweet notification." The statement cleared out that "there is no 'Singapore variant.'