Samsung Galaxy Z Fold 3, and the company's future devices, such as the Galaxy Z Roll and Galaxy Z Slide are getting a new Split UI. A leaker suggests that it will be more flexible and adaptable for a rolling, folding, and sliding screen. 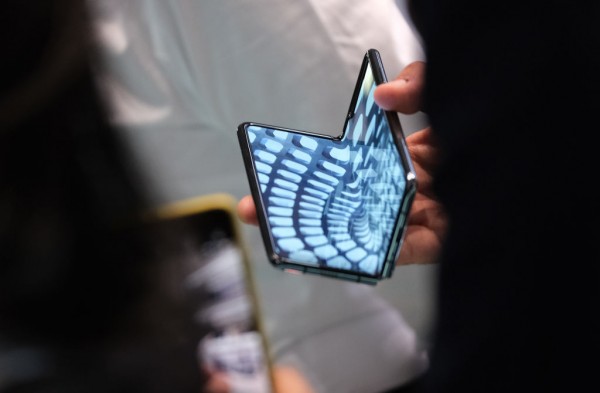 (Photo : by Sean Gallup/Getty Images)
BERLIN, GERMANY - SEPTEMBER 05: Visitors have a look at the new Samsung Galaxy Fold smartphone at the 2019 IFA home electronics and appliances trade fair on September 05, 2019 in Berlin, Germany. The 2019 IFA fair will be open to the public from September 6-11.

The new Split UI is another hint that Samsung is certainly launching another fancy phone in the future -- a slidable or a rollable device. The South Korean giant's electronics division recently filed the trademark for the names "Z Roll," and lately, "Z Slide."

It comes after the display department filed for the patent of the said devices.

However, there are no official announcements from the phone maker yet. But, these developments are slowly teasing what to expect with its next addition to its Z lineup.

The said interface is set to be an update of the existing One UI that the Samsung Galaxy Z Fold 2 currently carries. And, it vows to bring an interface that adapts to changing forms of the screen of future devices.

A leaker named Ice Universe posted GIFs to tease the supposed UI as it flexibly adjusts to various screen sizes, Android Central reports. The leak posted on Twitter shows in action how the interface allows adaption from a phone to a tablet, and even to a foldable.

The UI will not only be best for foldable phones, but for rollable phones too, SlashGear reports. As the leak bared, the interface extends outwards for the bigger screen, accordingly.

Android, on the other hand, has only supported in its interface two apps running from side-by-side. However, the Google OS has not yet developed a native design for foldable, and now, rollable and slidable phones, SlashGear said in the same report.

The next Galaxy Fold is anticipated to arrive in August, and it may be the first time that we will get to see the Split UI live in action. Yet, it is still uncertain.

Furthermore, the Galaxy Z Fold 3, is also expected to be relying on swipes alone for navigation, sans the physical buttons, when it is finally released to the public. Also noteworthy to expect is the under-display camera. These two combined could put the aesthetics of the Samsung phone to the next level.

Samsung Display also flaunted new OLED technologies on May 19. It includes the S-Foldable, 17-inch foldable, and rollable. All of which could carry the leaked UI.