The McDonald's restaurant in Illinois has thought of a nice idea to help the new workers thrive amid the pandemic scare. The company will be giving away iPhones for free if the new employees will work for six months and more.

The economy has been struggling when the health crisis hit many people, especially those who have jobs. Many individuals have a hard time coping up with the unexpected.

Despite the US government's effort to reach out to those who lost their occupations, the action is still enough to cover the necessities of all who need to survive. To help alleviate the daily living of the people, several organizations and companies have come up with different ways in the form of incentives and benefits to their workers.

McDonald's Has a Free iPhone Giveaway to the Incoming Staff 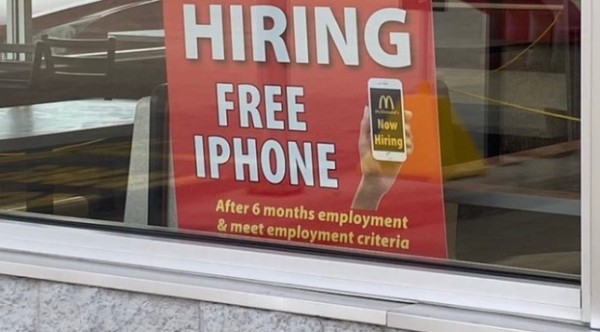 According to Cult of Mac, the popular fast-food chain has been facing a lot of employee turnover from the get-go of the pandemic. The post-COVID problem that the restaurant has dealt with resulted in a lot of employees being removed from their jobs-- a nationwide labor shortage on its worst stage.

To attract more staff to work with them, the McDonald's branch in Illinois decides to print an advertisement on the window which reads, "free iPhone after 6 months employment & meet employment criteria." The captured image has quickly gone viral on social media.

For corporations, finding a huge workforce could be a headache since the majority of employees are looking for additional benefits before accepting the job. This summer, not only the erratic weather is the enemy of the establishments, but also how they would resume and regain their profit.

Companies will do everything but pay you a living wage https://t.co/YVLMqD13B8

According to a McDonald's spokesperson in the restaurant based in Altamont, the "franchisees around the country" are giving a lot of incentives to the newly-hired staff. However, what they offer is not a "corporate-backed initiative."

In particular, the franchisees of McDonald's will grant a unique set of employee benefits and programs in the country to lure more workers and encourage them to stay at work.

"To remain employers of choice and further differentiate what we have to offer, owner/operators are leading an effort to implement an enhanced Employee Value Proposition," National Franchisee Leadership Alliance chair, Mark Salebra said in a report by The New York Post.

He added that the industry's position in the market suits the competitive balance among other industries.

While the iPhone incentive sounds good for the employees, some Twitter users criticize what McDonald's recently did. Some people said that the company should give an appropriate wage increase for the incoming staff.

Besides McDonald's, companies such as Taco Bell and Chipotle have announced that they will be granting new perks to persuade more people to work for them. In Texas, McDonald's said that it is currently hiring 25,000 people.

Earlier this May, the fast-food chain said that it will be giving a raise of the hourly wage of the workers in the next coming months.