Water bears and a handful of glow-in-the-dark baby squids are about to embark on a journey that most humans will never even experience in their lifetime.

Digital Trends reports that the next NASA mission to the International Space Station (ISS) will carry with it a payload of water bears (aka the toughest little life forms on Earth), as well as baby bobtail squids to aid in several science experiments involving zero gravity.

The mission will be a cargo resupply involving SpaceX, which will launch the critters in a Falcon 9 rocket from Florida's Kennedy Space Center, as reported by LiveScience.

In one of these experiments, the ISS astronauts will try to determine what helps water bears survive intensely inhospitable conditions. They will do this by looking for the genes that make water bears as tough as they are.

If the experiment produces great results, then human spaceflight will become a lot easier because scientists will be able to identify the stressors that make life difficult in zero G.

Aside from that, the baby bobtail squids are part of a rather curiously named experiment called UMAMI (Understanding Microgravity on Animal Microbe Interactions), according to a report by CNN.

Obviously, this isn't the type of umami that you can taste.

The UMAMI experiment's main goal is to see how healthy microbes interact with animal tissues while in space. Humans, like a lot of animals, rely a lot on these microbes to keep their immune and digestive systems healthy. NASA and the ISS astronauts will try to see how spaceflight (and re-entry into the planet) alters this microscopic interaction.

To say that water bears are tough is a massive understatement given how tiny they are, at just about a millimeter long. They got their name for their pudgy appearance and their most common habitat.

Google "water bears" and see that they have a little bit of cuteness in them, but do not let that fool you.

Water bears can survive almost anything, from temperatures as low as -272 degrees celsius to temperatures hotter than boiling water at 150 degrees celsius. They can stay alive literally frozen in time for decades at -20 degrees. They can live through atmospheric pressure levels from 0 to 1200 atm, which is the pressure reading in the Mariana Trench, the deepest point on Earth. Heck, they can even survive extreme radiation levels between 5,000 to 6,000 Gy, as well as being literally fired out of a gun. 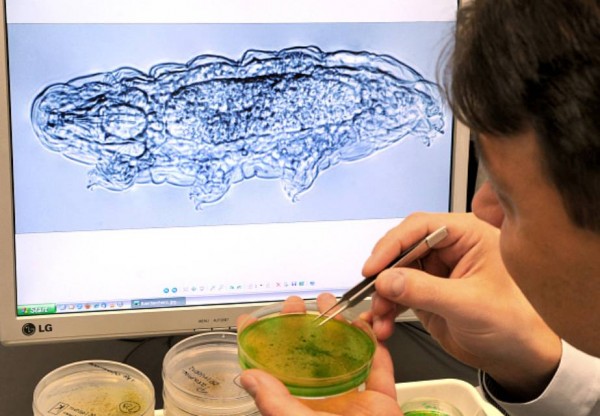 (Photo : Waltraud Grubitzsch/picture alliance via Getty Images)
Zoologists and biologist Georg Mayer prepares tardigrade situated in petri dishes in front of an image of on a 1000-fold magnification of the 0.2mm small animal featured on a screen at a laboratory of the Institute of Biology in Leipzig, Germany, 11 March 2013. Tardigrades, also known as waterbears or moss piglets, survive temporary freeze, being cooked and stays in outer space.

We humans, despite our big brains, are not as tough as we want to be. And that's where water bears come in.

The astronauts on the ISS want to know what makes these little guys basically indestructible, so they can help make human spaceflight easier. Considering that we're sending people up to space like it's commonplace now (not to mention planning to colonize Mars), then the experiments involving the water bears and baby squids are very essential.

Leave it to the tiny but mighty tardigrade (also baby bobtail squids) to help jumpstart humanity's distinction as a spacefaring civilization!

Tardigrade Bullets? Scientists Fire Water Bears From a Gun to Test How Tough They Are

Water Bears May Offer Clues To Human Health And Survival