The Chinese Rover "Zhurong" that landed on Mars in May has new photographs while exploring the Red Planet. The space agency of China released the latest images on Friday, June 11. 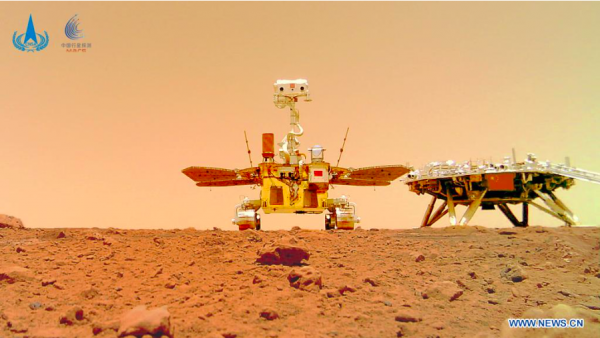 (Photo : Screenshot from xinhuanet.com)
The Chinese rover “Zhurong” that landed on Mars in May has new photographs while exploring the surface of the red planet.

According to NDTV, the photos that China National Space Administration released on Friday were dubbed as "China's imprint."

The media publication added that Zhurong is the first successful probe landing on Mars. It has then made China as a space superpower. As such, the rover flaunted a large flag of the country as it travels along the surface of Mars.

China added that the landing is definitely successful — in which the tasks are done unhampered, and the rover is "in good condition." In addition, Xinhuanet, a state media, said that the photos proved that the exploration mission of China is a "complete success."

China unveiled multiple images of the rover and landing site as well.

It even includes a 360-degree panorama view of the area before the landing commenced. The photograph was made possible by collating photos that the Zhurong captured from different angles.

As mentioned, one of the images showcased the flag of China. To be exact, that photo was taken as Zhurong traveled "60 degrees east by south to the landing platform," Xinhuanet said in the same report.

The rover even took a selfie showing a bird-like flapping its wings pose. The camera on the top part seemed like two eyes looking at the camera lens. The self-portrait was taken thanks to a wireless camera that transmitted photos and video to Zhurong.

The Chinese rover landed on the red planet on May 14.  Zhurong was derived from the name of a war and fire god in China.

Moreover, it had experienced a total of "nine minutes of terror" as it landed that Utopia Panitia of Mars.

For better understanding, NASA uses the word "terror" to indicate the time that the radio signals are delayed, and as such, the spacecraft becomes uncontrollable.

Additionally, as per NDTV, Zhurong has six wheels and weights at 240 kilograms. Not to mention that it is sustainably solar-powered.

It will be studying Mars for a total of three months. And more precisely, it will be capturing photos and gathering samples of rocks for further studies.

The feat that China has achieved has caught the attention of Elon Musk and NASA's Senator Bill Nelson. Both have extended their congratulatory remarks to the Chinese space agency.

It comes after the first images of Mars surfaced after Zhurong captured it.

Unexpectedly, the remarks were made, enough though China is a rival of the United States in space exploration.

On the other hand, NASA is studying the Jezero Crater with the American counterpart of the Zhurong, named Perseverance rover.

Related Article: China Centralized Television is Talking About Uniswap $UNI | Could China Be Selective on Cryptocurrency