China's most recent landing on the red planet hints that there is a development in its space exploration. After a seven-month-long drifting in space, the Tianwen-1 lander has finally touched down on Mars' Utopia Planitia.

The landing of the Zhurong rover marks China's historic feat as the third country to successfully arrive on the red planet. Apart from the hardships of the awaiting challenges along the spacecraft's journey, the three months of orbiting have come in a full circle. 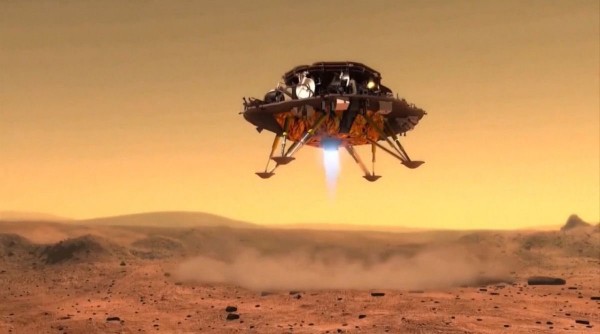 (Photo : Latest in space (@latestinspace) from Twitter)
China became the third country to land on Mars after its Zhurong rover successfully touched down the red planet for its Tianwen-1 mission.

NASA described the said "terror" term as the time interval when the authorities have no entire control over the rover due to the delay of radio signals.

The rover Zhurong, which was named after the legendary god of war and fire in China, has completed its roundabout trip in space en route to the red planet. The China National Space Administration (CNSA) designated the name for the space exploration device.

According to the South China Morning Post's report, the team behind the Tianwen-1 mission confirmed the landing on May 15 via Zhurong Mars rover's telemetry signal. By the time of its touchdown, the Tianwen-1 lander has perched on the Utopia Plain located in the southern part of the red planet.

The latest achievement of China has set its tight battle with the US when it comes to the global technological progress in the field of space exploration.

Currently, the US is still the leader in space technology, but as the competition tightens, China is growing hellbent on chasing what the former has already reached over the past years. The two have been involved in a recent quarrel over the space debris.

The development that the Chinese space agency has attained has been on a booming pace. In recent years, the nation has completed its lunar trip through a robot mission.

The team managed to bring some samples from the moon. Moreover, China has also begun constructing its own space station which could go at par with other major space sites.

Besides the United States, the second country to triumphantly perform a "soft landing" on Mars is Russia. Unlike the usual touchdown, the soft landing is only a light touch on the surface. However, it still requires a thorough process of control-focused procedures and deceleration.

In the next 90 days, the Zhurong rover will be aiding the Chinese space agency in the data collection for the surface of the red planet.

Under extreme factors, the exploration on Mars is not easy for the spacecraft, especially that there are a series of immense dust storms on the planet which make the task more difficult.

For the signals to reach Earth from Mars, it would take up to 20 minutes for it to be processed. NASA's moniker to the scene, "seven minutes of terror" is the time when the team cannot direct the descending lander. There is no human disturbance during the event.

China's Zhurong Landing Could Be a Jumpstart for Bigger Space Missions

The world is watching China's space technology progression. China's first Mars probe which includes the participation of Zhurong has been a big part of the country which is still polishing its space exploration tactics.

According to CNET, the Tianwen-1 mission which was released last July enveloped three important parts: the rover, lander, and the orbiter which began orbiting the planet in February.

The components were not launched immediately since they would be separated from the orbiter when they reached 70km above the red planet's surface. Later, it would speed up at a speed of 5km per second on its way to the surface.

A researcher from CNSA said that what Zhurong did was "harder" compared to the lunar rover's landing.

"Landing on the moon relies primarily on rocket engines to decelerate, as the moon has no atmosphere, while the first stage of landing on Mars uses its atmosphere as brakes," the anonymous researcher said.

Related Article: China's Tianwen-1 Mission Prepares for Mars Touchdown on May 14: How Will it Endure the 'Seven Minutes of Terror?'