Samsung, yet again, is using plastic for the rear of its upcoming Galaxy S22 smartphone lineup, except for the Ultra. The top-of-the-line variant seems to stand out significantly from other devices in the future series by sporting a glass back cover. 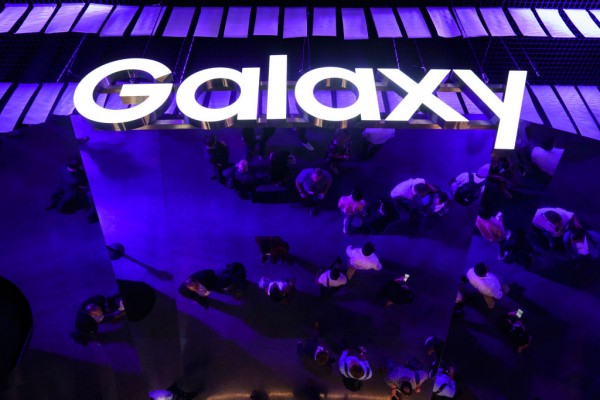 (Photo : by Drew Angerer/Getty Images)
NEW YORK, NY - AUGUST 7: Samsung Galaxy signage hangs on the ceiling during a launch event at Barclays Center on August 7, 2019 in the Brooklyn borough of New York City. Samsung announced the Galaxy Note 10 and Galaxy Note 10 Plus smartphones and they will go on sale on August 23 starting $949.

The South Korean tech giant started using polycarbonate plastic for the rear of the Galaxy S21 variant. Moreover, the more premium phones such as the Galaxy S21+ and Ultra carry a glass back -- and that could extend to its successors, as ITHome reported.

ITHome also noted that, surprisingly, the Galaxy S22 and S22+ will have a smaller screen than their predecessors.

Now, June 15, another development from the upcoming phones has been unveiled. The report specifically said that the Galaxy S22 Ultra will be the only model to flaunt the glass finish at the back. On the other hand, the Galaxy S22 and S22+ are getting a "brand new processing technology" for their rear. Although it is still plastic in material, its process will be upgraded from the S21 series.

On top of the glass back, the Galaxy S22 Ultra is also the only device in the 2022 lineup to carry an LTPO or low-temperature polycrystalline oxide display.

These early reports of its features show that the top-of-the-line model is being groomed to certainly stand out from its cheaper siblings.

Although a plastic rear for smartphones connotes cheapness, it is more durable than glass and softer to touch as well, according to Digital Trends. Not to mention that it is not as slippery as the sleek mirror finish that premium phones have.

So, there are pros to the back material that Samsung uses for its flagships. It is perhaps why the plastic back is here to stay.

Moreover, the obvious reason why the plastic material exists on Samsung's flagship is that  it is cheaper than glass. Thus, consumers experienced a notable price reduction with the Galaxy S21 when compared to earlier flagship phones, Android Authority reported.

The online publication added that the cheaper material balances the price as the phones increase their computing power.

It is still unclear if the next flagship is getting an expensive Exynos chip or a Snapdragon chip.

However, it is still too early to be certain of what is coming to the new flagship phones of the South Korean giant in 2022. It is also worthy to consider that delays are possible.

On March 22, Samsung said that the shortage of components is at a critical level. It has come to the extent that the Note series skipped a 2021 release.

Meanwhile, the South Korean phone maker is still undecided if the production of the budget friendly Galaxy S21 Fan Edition will push through.

ⓒ 2021 TECHTIMES.com All rights reserved. Do not reproduce without permission.
Tags: Samsung Galaxy S22 Plastic Back Cover ULTRA
Most Popular