Elon Musk invited people to "visit and see" China via a tweet, which he believed to be the next top market for Tesla. 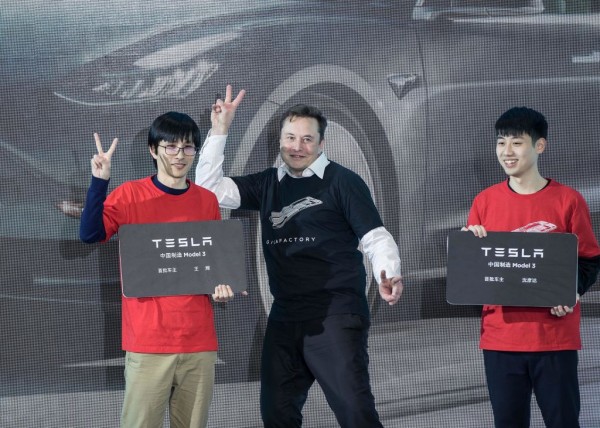 (Photo : by Ding Ting/Xinhua via Getty)
SHANGHAI, Jan. 7, 2020 -- Tesla CEO Elon Musk poses with Tesla China-made Model 3 vehicle owners during a ceremony in Shanghai, east China, Jan. 7, 2020. U.S. electric carmaker Tesla officially launched its China-made Model Y program in its Shanghai gigafactory Tuesday, one year after the company broke ground on its first overseas plant. The first batch of China-produced Model 3 sedans was also delivered to its non-employee customers at an opening ceremony for the program.

He goes on to marvel at the infrastructure of the Asian country, which he dubbed as "truly amazing."

Benzinga reported that the Tesla CEO sang high praises for China in response to Xinhua News, a state-run media, tweeting about the centennial celebration of the Communist Party.

Elon Musk then immensely commended China's economic standing. As he marveled at the Asian country's achievement, he enthusiastically invited other people to visit the country.

It is not the first time that the Tesla boss spoke high favorable about China. As such, CNN noticed on March 24 that Musk is trying to win back the Asian country.

It came after his company faced China's wrath as the country accused his vehicles of spying. The Asian country pinpointed the numerous cameras that Musk's Tesla vehicles feature, and its ability to record videos anytime it desires.

On April 8, the Tesla CEO responded to the allegations of China, saying that the cameras only worked in the United States. Even so, car owners have the choice to opt-out of the system.

China's accusations have led to the banning of Tesla vehicles in any military complex in the Asian country. Thus, Musk had to clarify it.

That said, Musk started to marvel at the Asian country in March. He told CCTV, a state-owned network in China, that he predicts that it will soon be Tesla's "biggest market," as per Insider.

Currently, China accounts for 30% of the total sales of Tesla vehicles. It now comes second to the United States.

He further forecasted that the economy of the Asian country will be the most globally significant in the future. Musk noted that China has already strengthened its sustainable energy commitment by then.

On June 27, the SpaceX and Tesla CEO tweeted that China's Zhurong Mars Rover is "cool." It was his response to the progress video that the rover has recently uploaded.