The Square Kilometer Array Observatory (SKAO) has agreed to build the largest radio telescope networks in existence. The construction will happen in South Africa and Australia. They will cover the SKA-Mid and SKA-Low which come with varying radio frequencies. 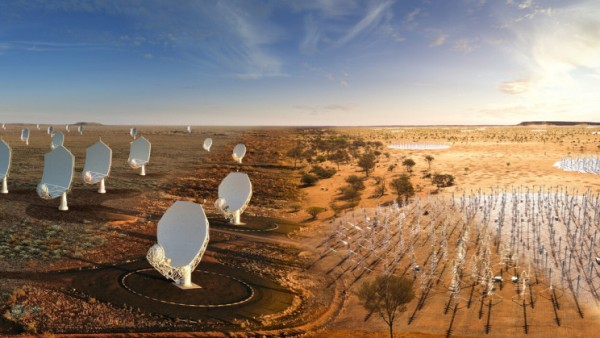 (Photo : SKAO)
SKAO's construction of the two largest radio telescope networks has been finalized. The team however has some concerns for Starlink satellites which might interfere with them.

According to a report by Slash Gear on Sunday, July 4, SKAO has given a green light for the building of the two networks for radio telescopes. The organization has only started in the early part of 2021.

In addition, the approval has taken place following the submission of the documents such as the Observatory Establishment and Delivery Plan and the Observatory Construction Proposal.

SKA assures that what they are doing is for the own good of the people in terms of its advantages in the economy and society. Most importantly, the digital age of technology has paved the way for many innovations to happen which would generate money for the circulation of the economy.

Since many people would be hired for the construction of the large telescope networks, more will have an income for their jobs. Additionally, the industrial improvement of the countries involved in the process would be seen as well.

Over the last few weeks, work surveys have been rolling out before the building of SKA telescopes starts. Now, the experts will have more time to investigate what lies beyond the universe and look for the pattern behind the mysteries hiding in it.

By 2022, the construction of the large telescope networks would commence. It is expected that it will be finished by 2028. Scientists could experiment with its capabilities in the future.

According to Prof. Philip Diamond, the Director-General of SKAO, what happened was staged for 30 years "in the making."

"Today, humankind is taking another giant leap by committing to build what will be the largest science facility of its kind on the planet; not just one but the two largest and most complex radio telescope networks, designed to unlock some of the most fascinating secrets of our Universe," Diamond said in Interesting Engineering on Monday, July 5.

The astronomers need highly advanced networks of telescopes that could see more about the events happening in space. While this project sounds promising, a known fact emerged about the presence of the satellites above.

For instance, Diamond mentioned the interference of the satellites and other spacecraft during the discovery. He described the participation of the mega constellations to be a game-changer for them.

The nearest example of this is SpaceX's Starlink program which aims to help individuals across the world to have reliable internet access. This concerns SKAO that a big number of them might affect the frequency of the networks during usage. In short, the capability of the radio telescopes will be lessened.

Meanwhile, another telescope, the James Webb Telescope continues to face delays for its launch date. It is expected to be released in November or December 2021.