Johnson & Johnson's COVID-19 vaccine has been linked to a rare autoimmune disorder known as the Guillain-Barré syndrome, which may lead a person to paralysis. The new fact sheet was released by the FDA after the label of J&J's vaccine was discovered to have warned about the side effects that would lead to the said neurological disorder.

Initially, J&J or Janssen's COVID-19 vaccine was a frontrunner in the race to procure an immunity dose against the virus but was halted on a lot of occasions due to cases of blood clotting among patients. 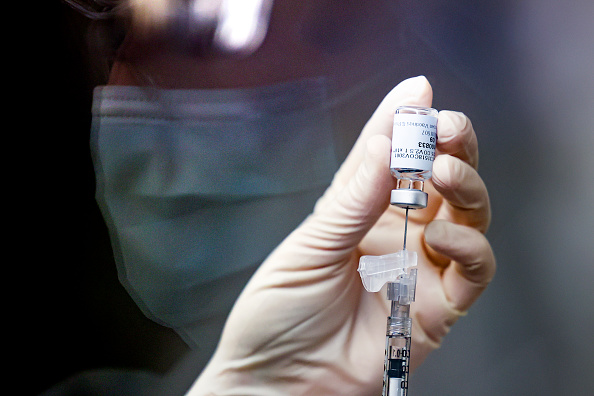 (Photo : Michael Ciaglo/Getty Images)
Rocky Mountain Regional VA Medical Center investigational pharmacy technician Sara Berech is reflected in the glass of a fume hood as she prepares a dose of the Johnson & Johnson COVID-19 vaccine for a clinical trial on December 15, 2020 in Aurora, Colorado. The Johnson & Johnson vaccine could be submitted for emergency use by late January and is the only vaccine among leading candidates given as a single dose.

As per the US Food and Drug Administration's fact sheet, Johnson & Johnson's COVID-19 vaccine has an existing label on its list that warns of the Guillain-Barré syndrome that may be developed. The disorder was observed on people ages 50 and up, with as many as 100 preliminary reports out of the 12,000 and more patients that received it.

According to CNET's report, the cases were developed around two weeks after the vaccine's administration to said cases of those which have shown symptoms of the vaccine.

Janssen's COVID-19 vaccine is known to be based on the adenovirus ingredient, a traditional base for vaccines like the one which Oxford and AstraZeneca's shots.

Ninety-five of the said 100 cases have required hospitalization and considered these patients to be under serious pretenses. The FDA also noted that there is one death that is linked to the Johnson & Johnson vaccine and the Guillain-Barré syndrome.

What is Guillain-Barré Syndrome?

The Guillain-Barré syndrome is a neurological disorder and an autoimmune disease that attacks the body's nerves, with cases leading to paralysis and disabilities. The disorder is fast-acting and affects the entire body within weeks of the first symptoms being exhibited.

The origin of the disorder is still unknown, but it is most likely developed from the Zika virus and other known adverse diseases. The disease has no cure, but people can recover from it within three to six months, with 60 to 80 percent being able to regain mobility and move away from paralysis.

Will Janssen's Vaccine Recipients Develop It?

There is a possibility that those who received the Jansen or Johnson & Johnson's vaccine will develop the Guillain-Barré syndrome, as warned by its developers and the FDA. However, not everyone will contract it as it would be a rare side effect of the vaccine.

Moreover, the disorder is mostly developed by immunocompromised people, or those who are more immune to catching diseases or illnesses as their immune systems are weaker compared to healthy ones.

Related Article: Johnson & Johnson's COVID-19 Vaccine is Protective Against Delta Variants, But Is It Safe for Public Use?