Tiny goldfishes were discovered to grow enormous after being dumped in a lake in Burnsville, Minnesota, and people from Twitter are saying that they resemble a popular Pokemon known as "Magikarp." The phenomenon has made it viral on social media, and people cannot believe that these goldfishes survive to live on massive lakes. 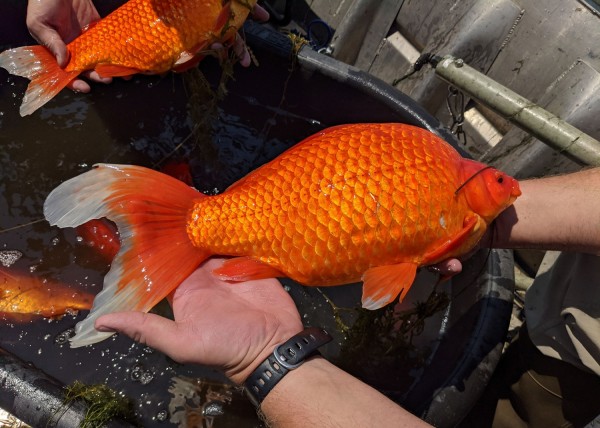 According to the City of Burnsville, Minnesota's Twitter announcement (@BurnsvilleMN), these goldfishes were found in one of the lakes, and instead of dying, they survive and adapt to the environment. Even more so, these goldfishes grow enormous on lakes and were said to contribute to the "poor water quality" of the lakes they were dumped on.

Please don't release your pet goldfish into ponds and lakes! They grow bigger than you think and contribute to poor water quality by mucking up the bottom sediments and uprooting plants.
Groups of these large goldfish were recently found in Keller Lake. pic.twitter.com/Zmya2Ql1E2

These goldfishes were said to be the results of being thrown out of the house, as parents dump them on lakes instead of down the drain, toilets, or trash. The act of compassion they do to these goldfishes may preserve lives but takes a toll on the environment as they are not originally part of these lakes, and are destroying the ecosystem instead of contributing to it.

As people saw the photos from Burnsville's tweet, the Twitter community has reacted to the odd size of these goldfishes and attributed them to a popular pop culture icon, the Pokemon. In particular, people were referring to these overgrown goldfishes as "Magikarp," or the carp Pokemon that does nothing before evolving to the gigantic Gyarados. This has led to the circulating joke on Twitter that asks "are Pokemon real?;" and people have been turning this into a meme despite the massive concern of authorities in their findings. Goldfishes are part of the carp family, and so does Magikarp, and this association may be close.

It is known that most Pokemon are based on real-life animals and hybrids of these (Squirrel + Turtle = Squirtle), but these battling creatures do not exist in the real world.

Do not Throw Goldfishes in Lakes

In a report by Tech Times in 2016, it was found that dumping goldfishes in lakes would lead to their change and incredible growth spurt, leading to them being considered as pests in bodies of water. Goldfishes are known to be bred as aquarium fishes, and the result of that is they are no longer accustomed to being in the wild.

Instead of integrating themselves within the environment, they turn out to be massive polluters and contribute to the destruction of the said ecosystem, case in point, the lakes. People may think that dumping them on lakes is a way for them to have a better life, but instead, gives them a life to do more harm than good to fellow lake dwellers.

Related Article: Goldfish Get Drunk On Themselves To Survive Frozen Waters