SMITE Sends the Gods to the Upside Down With 'Stranger Things' Crossover, Mid-Season Updates

SMITE players can now enter the Upside Down and enjoy a host of new features with its Mid-Season Update, including its Stranger Things crossover.

Players of the Hi-Rez Studios' free-to-play MOBA on all platforms - PC, PS4, PS5, Xbox One, Xbox Series X|S, and Nintendo Switch - can enjoy all the good things to come from one of the biggest SMITE updates this year. 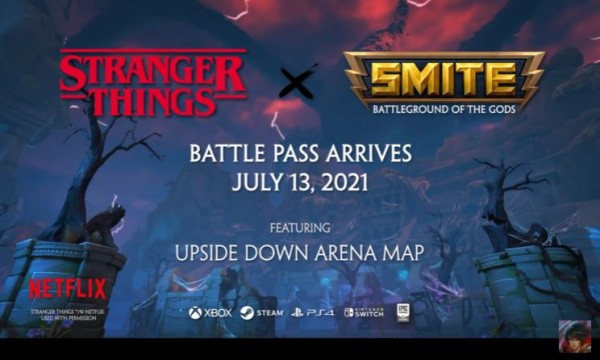 Four fan favorite characters from the hit Netflix sci-fi horror will be pairing up with gods from different SMITE pantheons, giving new twists for beloved characters. Use Eleven and her psychokinetic powers with Scylla, or give the God of Music Apollo with the dual revolvers used by Hawkins Police Chief Hopper. Players are also treated to the horrendous creatures of the Upside Down: make the Bakasura scarier as The Demogorgon or play as The Mind Flayer Sylvanus.

In each of the four SMITE and Stranger Things crossovers, players will experience entirely new character models, skill, movement, and interaction animations, and visual effects. Furthermore, an additional Prestige skin is available for Eleven Scylla and Hopper Apollo - bringing the total of new skins to six.

There are also a number of thematic items to complete that Stranger Things feel, including free items, as players move through the Stranger Things Battle Pass. On the other hand, purchasing the latest Battle Pass instantly unlocks Hopper Apollo and immediately makes all thematic content available.

Even the Arena Map is in on the Stranger Things crossover, turning into the Upside Down - the alternate dimension heavily featured in the Netflix series will now host the Battle of the Gods.

Maps, Designs, and Events in the SMITE Mid-Season Update

Aside from the game changing SMITE and Stranger Things crossover, a lot of changes are also rolling out across all platforms. Starting with the Conquest mode, the game's most challenging and competitive experience thus far, the map will host a slightly altered experience and environment. Most significantly, a new jungle monster will be roaming the fields as well as a new shipwreck crashed somewhere in the map - two new features that have been raising curiosity if a new God is on the way. These changes mark the second iteration of the Evolving Conquest Map program.

Also, Hi-Rez Studios are implemented in the latest Mid-Season update, including design and balance to improve the current meta. One of the highlights is the removal of the boots in the game. The early-game must-have is no longer available, opening paths to new builds and strategies as all Gods receive bonus Movement Speeds in their first levels.

Underused Relics in the game are buffed, and a new Support item is introduced: the Bracer of Radiance. With the new reworks now in the game, the current status quo in SMITE is set to change in the following days and weeks.

SMITE has also released the Court of Midnight event, pointing the spotlight to its recently-released God, Morgan Le Fay. Aside from her first in-game skin, it has other cosmetics and quest lines for players to explore and enjoy.