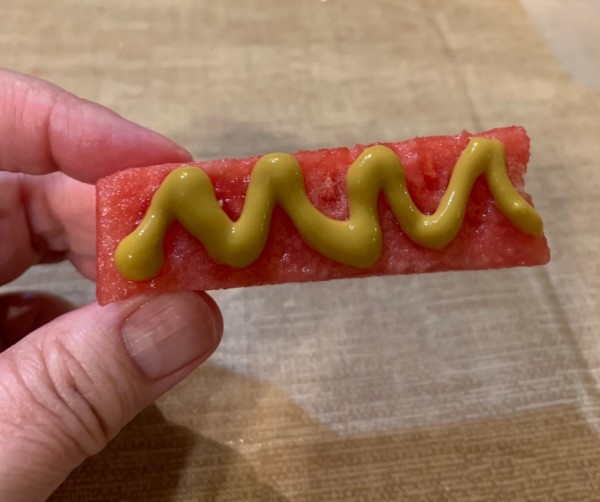 (Photo : JeannieSays via screenshot from Twitter )
Should you try the popular TikTok food trend involving mustard and watermelon? Here's what the people discovered about its taste.

TikTok is known for the strangest challenges and food trends that people find interesting--and sometimes disappointing. The latest Watermelon and Mustard trend will tour you to another world through your tastebuds.

At first glance, those who have no idea about this weird combination might ignore the best possible taste of this pair, yet some people who have tried it shared various sentiments.

A TikTok user named Lizzo has tried putting yellow mustard into a watermelon. In the video, the mustard-dip fruit might appear to be unappealing at first. Of course, if you are already an old viewer in the video-sharing platform, you will conclude that this trending challenge is becoming normal for everyone.

The internet has gone crazy following the rise of this food challenge.

Many TikTok viewers have a primary opinion about this stuff: gross, disgusting, and anything in between. Yet, for Lizzo, there's no stepping back in trying this viral food trend.

In a report by Delish writer Alexis Morillo, Lizzo drizzled the yellow mustard to the soft and red flesh of the watermelon in a duet video with another user @yayayayummy. "Welcome to is it bussin' or is it disgusting?" she told her viewers in the TikTok video.

Read Also: TikTok Viral Video Shows Exotic Pet Roaming in a Garden in Cambodia--Rescuers Said It Has No Canine Teeth and Claws

The difference between Lizzo and @yayayayummy's take on the challenge is the type of yellow mustard.

Instead of using the French variant, Lizzo made use of the Heinz yellow mustard. After finishing her first bite, the content creator seemed to be confused with the taste.

The first impression always lasts. Maybe this saying rings true for Lizzo after taking her second bite. Judging from her facial expression, her verdict over the taste is so-so. For that reason, Morillo has joined the food mustard and watermelon trend to find out the real taste by herself.

From what Morillo discovered, the weird taste for the mustard-drenched watermelon is automatic, as per other people. However, the reporter was surprised that the outcome turned out to be the opposite. She said that there was some balance of sweetness in the watermelon complemented by the taste of the yellow mustard.

Another reporter from PopSugar described the taste like the "stepsister of salty and sweet."

Moreover, Kalea Martin added that the peppery flavor surprised her in each bite. She even compared it to how an espresso produces a caramel flavor out of salt and chocolate.

Final Thoughts About the TikTok Mustard and Watermelon Trend

On top of these comments, the combination of mustard and watermelon could be the twist of the challenge. Even though they are bizarre at first, the taste leaves a lasting impression on those who have tried the food trend.

Tiktok challenges, such as the quickest way of sealing frozen foods in less than five seconds, sparked some curiosity in readers. Yet, other challenges in the platform such as the tongue-piercing challenge are not recommended for anyone to try.