Steam Deck Is Poised To Take Over the Nintendo Switch's Top Spot, According to Analysts

Steam Deck, Valve's newest handheld gaming console, was announced recently to widespread fanfare. And according to a few industry analysts, it might just be the best one of its kind. 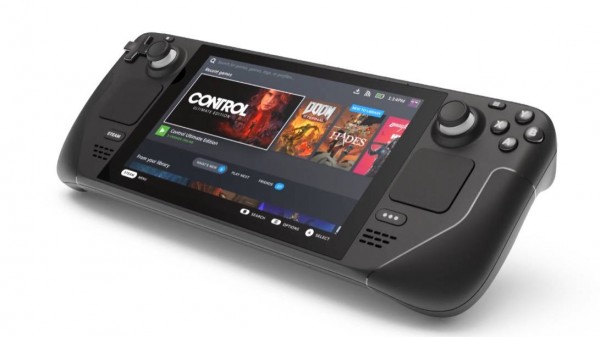 The handheld gaming market has been ruled by Nintendo and its best-selling Switch for some time now. But as Mashable reports, Steam Deck could be the one that topples the Switch off its top-selling pedestal.

Preorders for the new handheld went live as soon as Nintendo announced their own for their recently announced Switch OLED. It's not coming out until next year at most (mainly because preorders went through the roof immediately after going live), but demand is already sky-high. If you try logging into your Steam account (Valve's anti-scalper system requires prospective buyers to have an active one), you'll see that reservations are booked until next year. And it's only July 2021.

Right now, the Switch is still considered the most successful handheld of the current generation. According to official stats from Nintendo, the console has sold over 84 million units so far, placing it in third place behind the Wii and the Nintendo DS.

But with how the Steam Deck is already sold out without even actually going on sale yet (demand is so high it's already being scalped), the Switch seems to be in big trouble for the foreseeable future.

Read also: Valve Steam Deck vs Nintendo Switch OLED: From Price to Specs, Which Would You Choose?

Steam Deck: What Makes it So Good?

Valve made several bold claims about the gaming power of their handheld. They say that you can run anything in the Steam library on it. And judging from the hardware in it, people should be inclined to believe them.

Here's a perspective. Remember the Xbox One? As a last-generation console, it still was a powerful one for its time, despite falling behind the PS4. But compared to the power of the Steam Deck, it might fall short. The new Valve handheld sports a custom AMD chip with an integrated graphics engine based on the RDNA2 architecture. That's the same one you can find in Team Red's latest and greatest RX 6000 line, whose lower-end products already far outpace the GPU of the Xbox One.

The Switch, on the other hand, only comes with a custom NVIDIA Tegra GPU, which doesn't even compare. Steam Deck's GPU is powerful enough to run anything you can run on a PC, and more so drive its 60Hz screen for fluid 60 FPS gaming.

Furthermore, Valve is also equipping the Steam Deck with a super-fast SSD, 16 GB of low-profile DDR5 memory (modern, full-scale gaming PCs are still on DDR4), and full desktop functionality. That's basically the hardware prowess of a lower-end gaming laptop in your hands. If you want to know more about the Steam Deck's capabilities, you can watch this FAQs video:

Some can claim all they want that the Steam Deck is not a direct competitor to the Nintendo Switch. But it's a handheld gaming console. And right now, there's nothing else in the market it could dethrone aside from the Switch, especially with the disappointment of the Switch OLED.

AMD Vows to Ramp Up Production on Their RX 6000 Series: Are We Seeing Light at the End of the Tunnel?