Tesla Model 3 was recently spotted in China while driving through the deep floodwaters. The footage showed that the electric vehicle seemed to have no problem dashing forward across the flooded area. 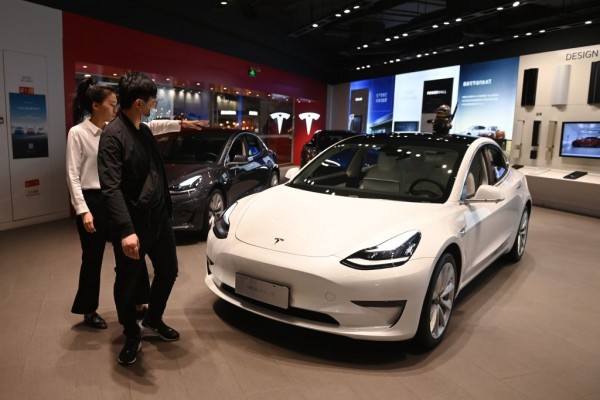 (Photo : GREG BAKER/AFP via Getty Images)
A man looks at a Tesla Model 3 in a Tesla showroom in Beijing on October 21, 2020

According to a report by Futurism on Thursday, July 22, the Tesla driver in the video drove straight to the deepwater.

The 13-second video featured a white EV, which the people described as "Tesla Boat."

It's noteworthy to see that the floodwater in Henan province on Tuesday, July 20, was deep. This instance could not allow other vehicles to pass through or if not, they would surely encounter difficulties before surpassing the flood-filled lanes.

However, the case for the Model 3 car was different.

There were no issues that the driver experienced during the trip in the deep floodwaters in China. Moreover, there seems to be a waterspout coming from the rear of the car. It could be the source of the power that enables the electric vehicle to zoom with ease across the flood.

In the clip, there is an instance where the driver appears to be pushing the car on one side. This did not display any problems in the vehicle. Upon reaching the shallow floodwaters, the Tesla Model 3 was seen to be working fine.

From another report from Teslarati, it's still unconfirmed whether the featured car in the viral video sustained damage, or if there are damaged components when it crossed the flood in China.

So far, what we could assume is that the car looks functional after it passed the deep waters in the area.

Although this case was an impressive run for the part of the Tesla Model 3 owner, many drivers would not risk proceeding to flooded areas through their vehicles. It's possible that the inside of the car might get damaged, or some parts could be affected by the water.

While it's true that Tesla Model S can swim in the water like a boat, the case for Model 3 could be different. Before, Tesla CEO Elon Musk said that their cars could act as boats because the battery packs and other units inside are well-protected and sealed.

We are sure that Tesla Cybertruck can brave the flooded roads since Musk mentioned it in the past.

As per Model 3, if it could emulate what the Model S could do, it's possible that it could swim in the deep water aswell.

Regarding the swimming Tesla cars, China has established a special testing area located at Gigafactory Shanghai. The simulation involves driving the Chinese Model 3 and Model Y versions in the flood.

The viral video on Twitter has already 1,500 reactions at the moment.