Through NASA's Earth Polychromatic Image Camera (EPIC), new images of the moon's shadow have surfaced during the solar eclipse that happened in the Arctic region on July 10.

The phenomenon involved the moon blocking the Sun's front portion. Many people, especially those who reside in Canada, Russia, and Greenland were able to witness the unusual eclipse

How the Moon's Shadow Look in EPIC's View 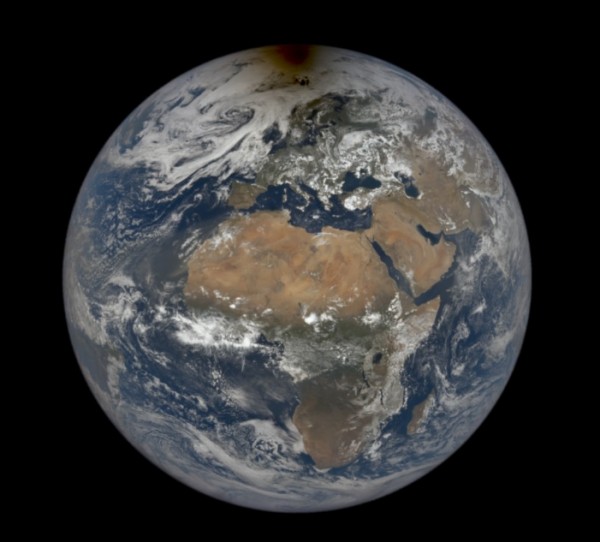 According to the recent report by Gizmodo on Friday. July 23, the scenario that took place in July was called the "full annular" eclipse, as per the international space agency.

From the planet, the moon's position is situated at a remote point. From here, the Sun that we usually see in the sky would look bigger than the moon.

From the photograph, the dark disk of the moon appears to be surrounded by the Sun. NASA noted that the Sun looks like a "ring of fire" at that position during the alignment.

NASA's Explanation About the Recent Phenomenon

EPIC's view of the moon's shadow is no magic since science has an explanation for everything. For that part, NASA now revealed the trick on how the shadow from the moon came with such an appearance.

From the video uploaded by the space agency, the phenomenon is simplified through an explanation about the distance among the three cosmic bodies.

NASA said that what we saw as the red part of the Sun during the blocking process could last for three hours. According to the team, the moon's duration to distance itself from the Sun will take nearly three hours.

What is NASA's EPIC Instrument

NASA's EPIC tool is not your usual camera. It is a hybrid of a telescope and camera. Nerdist called this a "combo" instrument.

Currently, the Deep Space Climate Observatory Satellite or the DSCOVR of NOAA houses the equipment. Although the phenomenon seems far from reach, EPIC was able to spot unique images from Earth a million miles away.

In 2015, NASA's EPIC released a dramatic photo of the Earth called the "Blue Marble." It was captured during the Apollo 17 mission.

In the same year, the combo instrument managed to have a new take on the Earth's appearance. At that time, EPIC was able to show the stunning images of the Sunlit Earth. The team had been taking shots of the planet every two hours.

"Taking images of the sunlit half of Earth from a distance four times further than the Moon's orbit never ceases to provide surprises, like occasionally the Moon getting in our field of view, or the Moon casting a shadow on Earth," NASA DSCOVR project scientists, Dr. Adam Szabo spoke during the agency's press release.

This is not the first time that NASA captured the moon's features. In the last six years, the space agency had published the "photobombing" image of the Earth's satellite on July 16, 2015.