Being at the right place at the right time allows the Juno spacecraft to listen in using its Waves instrument to pick up the radio waves.

This has given scientists the opportunity to figure out what causes these radio waves to happen.

NASA has been studying all the planets in the Solar System and these studies have shown that Jupiter, the fifth planet from the sun, has the largest and strongest magnetic field.

In fact, this magnetic field "extends so far that some of the planet's moons orbit within it," according to Space. Jupiter's volcanic moon, Io, is one of those moons.

Io is the closest moon to Jupiter and this has caused what NASA refers to as a "gravitational tug-of-war" between Io and two of Jupiter's other moons. This tug-of-war has caused volcanic eruptions on Io's surface.

Some of the gases and particles that Io's volcanoes release split into electrically charged ions that rain down on Jupiter via its magnetic field, according to the report. When these ions accelerate toward Jupiter's poles, they generate decameter radio waves.

NASA's study of Jupiter's radio waves with Juno's help has shown that "the electrons that create these radio waves emit a massive amount of energy, 23 times greater than researchers expected," according to the report by Space.

Io, also known as Jupiter I, is the third largest moon of Jupiter and named after a mythological character who was the priestess of the goddess Hera. It is also one of the planet's four Galilean moons, which also include Europa, Ganymede, and Callisto. Discovered in 1610 by Galileo Galilei, Io is the fourth largest moon in the Solar System.

NASA has described Io, Jupiter's moon, as the "the most volcanically active world in the Solar System" and has over 400 active volcanoes. Its very thin atmosphere is primarily made up of sulfur dioxide. Io has no rings or moons of its own.

Scientists have long studied Io, including how Jupiter's moon formed high mountains on its surface. Researchers have also learned that the moon cannot support life "as we know it." 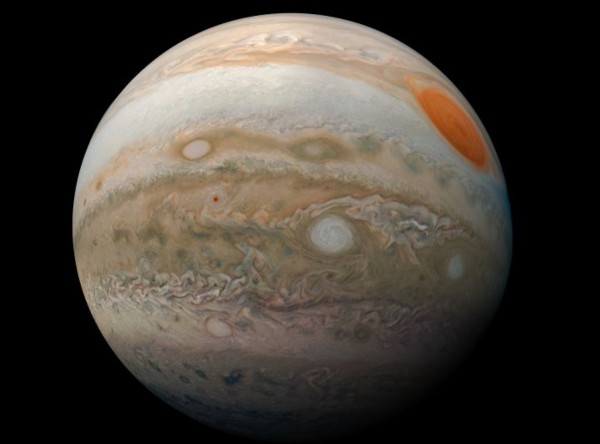 (Photo : Kevin M. Gill | NASA/JPL-Caltech/SwRI/MSSS)
Jupiter Marble, a reference to the classic Earth photo dubbed Blue Marble, shows the swirling clouds and storms of the gas giant. The photo was captured by the Juno spacecraft that has been studying Jupiter since 2016.

NASA's Juno spacecraft is a space probe that has been orbiting Jupiter since it entered the planet's polar orbit in 2016. The probe was launched on August 5, 2011.

The goal of the Juno probe is to study Jupiter, including its origin and evolution. Juno is also tasked with observing auroras, mapping the planet's magnetic field, and measuring water and ammonia found in the atmosphere.

Once its mission has been completed, the Juno probe will be deorbited into Jupiter's atmosphere.

This Is How Jupiter's Moon Io Formed Incredibly High Mountains