iPad Mini 6 to Release Without Mini-LED Display Upgrade, to Feature an LCD, A15 Chip Instead

iPad Mini 6 is not likely to get a mini-LED display, contrary to the earlier reports. The latest prediction said that the upcoming Apple device will instead feature a standard LCD. 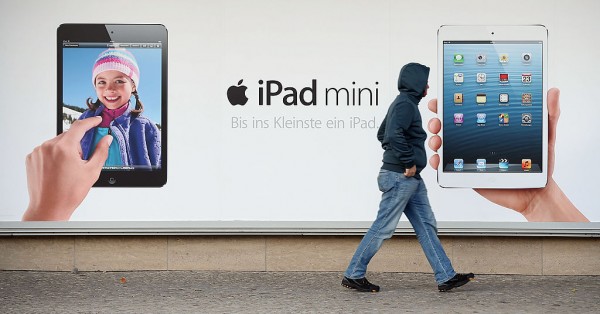 (Photo : by Sean Gallup/Getty Images)
BERLIN, GERMANY - NOVEMBER 06: A man walks past a billboard advertising the new Apple iPad mini on November 6, 2012 in Berlin, Germany. Apple recently released the Mini to compete with the growing number of small, tablet computers and the company is hoping for a strong Christmas season.

On the other hand, the iPad Pro and MacBook Pro lineup already introduced the mini-LED display on their devices. Some rumors predicted that the next iPad mini will be joining the premium devices of the Cupertino giant.

However, these speculations are now being dispelled by the latest report.

Another report based on the pronouncements of Ming-chi Kuo, an Apple leaker, and analyst, predicted that the other variant from the iPad Pro lineup, the 11-inch model, will soon be flaunting a mini-LED as well.

Now, a display market tracker that goes by the name Display Supply Chain Consultants CEO, Ross Young, tweeted that the iPad Mini 6 will not go the same route as the iPad Pro with its display, noting that the DigiTimes report is inaccurate.

It is to note that Apple halted the production of the MacBook Pro earlier this year due to a supply problem with the Mini-LED.

Also, mini-LEDs are known to be a more expensive option than the widely used OLEDs. So, it is perhaps the reason why the premium line of Apple devices first debuted the said display.

As such, Apple went on to allocate a whopping $200 million for the Mini-LED displays of the upcoming 14-inch and 16-inch MacBook Pro.

To be precise, the impressive investment of the Cupertino giant is meant for the purchase of surface mounting technology equipment, which will be essential in the display of the upcoming devices.

As per GizChina, the next iPad Mini will have a standard LCD and an Apple A15 processor. Not to mention that the Apple tablet is also likely to sport a USB Type-C port, as well as a magnetic smart connector.

While there is no confirmed launch timeline for the next iPad yet, some reports suggest that the launch will occur between October and November.

iPad Mini 6: What to Expect

Even before the official debut of the said device, there has been a couple of design renders surfacing every now and then.

One of them suggested that the upcoming device is borrowing the looks that the iPad Air 2020 flaunted, sporting narrower bezels and letting go of the home button. Thus, there will be significantly more space for the screen.

Separately, an Apple tipster, Jon Prosser, predicted that the iPad mini 6 will be available in three colors that other Apple devices previously sported: Black, Rose Gold, and Silver.

Related Article: Apple's iPad Mini-LED Leaks for Next Generation Looks Promising, Making You Think to Get One

ⓒ 2021 TECHTIMES.com All rights reserved. Do not reproduce without permission.
Tags: iPad Mini 6 Release Without mini-led Display Upgrade LCD A15 Chip Instead
Most Popular