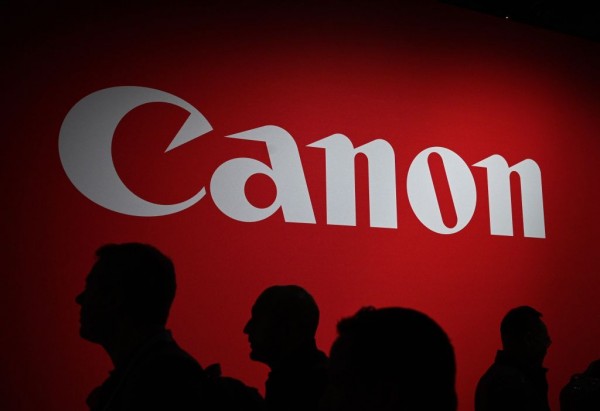 (Photo : by ROBYN BECK/AFP via Getty Images)
The Canon logo is seen January 8, 2020 at the 2020 Consumer Electronics Show (CES) in Las Vegas, Nevada. - CES is one of the largest tech shows on the planet, showcasing more than 4,500 exhibiting companies representing the entire consumer technology ecosystem.

Although the two point-and-shoot cameras are already dated, some may still find themselves choosing between them due to their timeless compact design and shooting capabilities.

Plus, even if these are not the latest cameras out there, both devices support Wifi, USB, and HDMI connectivity that current shooters readily flaunt. However, it is to note that only the Canon PowerShot G5 X allows Bluetooth and Pictbridge connection, according to GadgetsNow.

So, basically, the lenses of both cameras are pretty similar, except for the optical zoom capabilities. The G5 X call zoom up to 4.2x, whereas the G5 X Mark II, can do better at 5x.

As per CNET, one of the downsides of the PowerShot G5 X centers on its short battery life.

Meanwhile, DPReview also noted the same issue with the Mark II, adding that bringing a spare battery could help. But let us compare the Li-ion rechargeable power cells of the two shooters based on their specs.

Thus, the Mark II provides a slight improvement to the short battery life of the G5 X.

Canon gave both point-and-shoot cameras a viewfinder with a 3-inch display size and a display resolution of 1040000 dots.

However, the high-resolution OLED electronic viewfinder of the G5 X stands out if compared to the LCD of the Mark II.

Also, the G5 X chose the flip-and twist touchscreen instead of the flip-up screen that became popular due to its selfie-centered feature, which the Mark II carries.

When it comes to the flash of the two cameras, the Mark II goes a better range at 7.5 meters, whereas the G5 X only reaches up to 7 meters, which is still not bad.

Aside from the range advantage, the former also added flash exposure compensation and manual power adjustment.

Elsewhere, here is the Canon PowerShot G1 X Mark III, another point-and-shoot camera that sports a DSLR-level of the sensor.