AMD AM5 Socket Pictured in LEAKED Render; Will Be On LGA 1718

AMD is definitely going a different route for their next-gen Ryzen CPUs.

A leaked render of the AM5 socket has surfaced, and it looks very similar to that of a typical Intel socket. And rightfully so, because AMD is going the LGA route for AM5. WCCFTech also reports that the socket will be sporting the LGA 1718 pin design, meaning 1,718 pins on the motherboard correspond to the equal number of contacts on the processor itself.

The renders of the new AMD socket comes from a Twitter page called ExecutiveFix:

A first look at the AM5 socket, once again in the form of a 3D-render pic.twitter.com/84T6wUjpQ2

Since the new socket is obviously reminiscent of Intel's sockets, there's the obvious latch and retention arm that will keep the CPU secure onto the motherboard. It's a far cry from what Team Red has done in the past with their Ryzen CPUs for the past few years.

There is a slight difference, however, according to VideoCardz. The AM5 socket doesn't feature the characteristic screw that is present on the EPYC chips' sockets, which is the only other modern CPU from Team Red that's on LGA. It seems like the latch and clamp mechanism would be more than enough to keep the processor in place.

All renders are still unconfirmed, however, until actual pictures of the socket are released by AMD themselves.

AMD Socket AM5: LGA Is The Way To Go

Team Red has confirmed way back in May that it's going the LGA route for its next-gen Zen 4 consumer-class chips. It's also worth noting that the same leaker, ExecutableFix, was the one who first leaked renders of the underside of an AM5 processor.

As for the hardware that comes with Zen 4, right now, it's all speculation. However, these rumors do offer a lot in the way of excitement. According to initial rumors, AMD's decision to go LGA is about two major factors: better performance and power delivery. 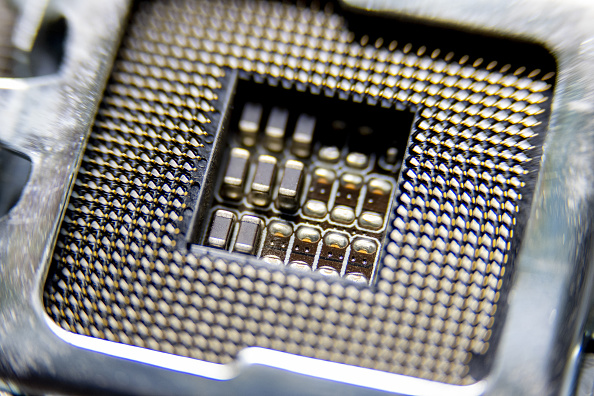 The current-generation AM4 socket might've offered way more upgrade paths than its Intel counterparts, but it's very limited because of its PGA (pin grid array) socket). It means the pins are on the CPU itself and not the motherboard. To keep the pins from being easily bent, there is only a very limited amount of them that you can install to the underside of a processor. Too many pins mean you require thinner ones, which can bend or break off even if you're putting the chip into the motherboard socket.

LGA, on the other hand, has pins on the motherboard. This design alone already allows for improved IPC (instructions per clock), which denotes increased performance. Just think of AMD's Threadripper and EPYC CPUs, both of which are their most powerful chips, and both of which are on LGA.

Here is even more stuff to be excited about for the release of the next-generation Ryzen chips. By next year, fans can expect as much as a 20% IPC improvement, as well as support for super-fast DDR5 memory. One might also expect support for PCIe 5.0, among other things, though this isn't confirmed yet.