The National Aeronautics and Space Administration (NASA) has posted a photo of a colorful moon borne out of 53 images. The artistic portrait of Earth's satellite resembles an artwork captured by the Galileo space probe. 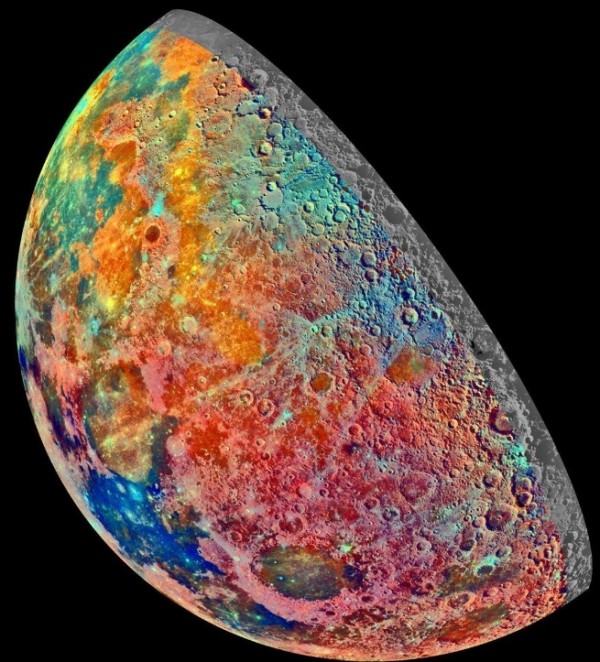 (Photo : NASA via Instagram)
Take a look at a colorful portrait of the moon captured by the Galileo probe on its way to Jupiter.

In what seemed to be an artsy portrait of the planet's natural satellite, NASA uploaded a usual sighting of the moon in many color variations. That was the time when the probe caught some glimpses of it on its way to Jupiter on Dec. 7, 1992.

NASA said that the colorful shades of the moon were not only for aesthetics.

According to the international space agency, the researchers found this image to be helpful in the context of studying the moon's topography. The vivid representation of its features in the northern hemisphere has been displayed.

In the Instagram image, the lunar highlands resemble the "bright pinkish areas." This involves the Crisium impact basin, as well as the orange and blue shades that symbolize the lava flows in the past.

"To the left of Crisium is the dark blue Mare Tranquillitatis, where Apollo 11 landed. The region is known to be richer in titanium than the green and orange areas above it," the caption reads.

Meanwhile, the region with the light blue colors depicts the craters that the asteroids or the meteorites left behind. NASA added that the blue rays, on the other hand, have been connected to the early craters on the moon.

According to a report by News18 on Friday, Aug. 6, the Galileo space probe could sound familiar to everyone since it is named after Galileo, a great scientist in Italy.

To date, the spacecraft has already flown in the past year. It has been roaming Jupiter from 1995 to 2003.

Just like another astronomical vehicle, the Galileo probe is equipped with multiple cameras for surveillance and other equipment. These tools serve as a guide for the scientists on their experiments on the big planet.

The spacecraft is also helpful during its journey to Europa, the smallest Galilean moon that orbits Jupiter. The scientists were able to identify the composition of the icy moon. According to them, it is composed of more water than the planet Earth.

While the Jupiter trip was in progress, the Galileo probe encountered an unforeseen problem. It plunged into Jupiter's atmosphere due to extreme pressure.

To continue Galileo's legacy, the scientists decided to use Juno, so they could resume their interrupted research on the giant planet.

NASA's Juno to Go to Ganymede

The new mission involving NASA's Juno spacecraft has led the scientists to witness the beauty of Ganymede, another Jupiter's moon.

Using Juno's cameras, the robot would be able to capture the best shots and at the same time gather some information in its surroundings such as radiation levels, pressure, and more.