‘Dead by Daylight’ Chapter 2 Leaks: 'FNAF' Springtrap, 'Hellraiser' Pinhead as New Characters; Who Would Be the New Killer?

The well-known asymmetric survival horror video game, which was developed by Behaviour Interactive and published by Microsoft Windows, is rumored to be having Springtrap from "Five Nights at Freddy's" and Pinhead from the horror movie "Hellraiser." 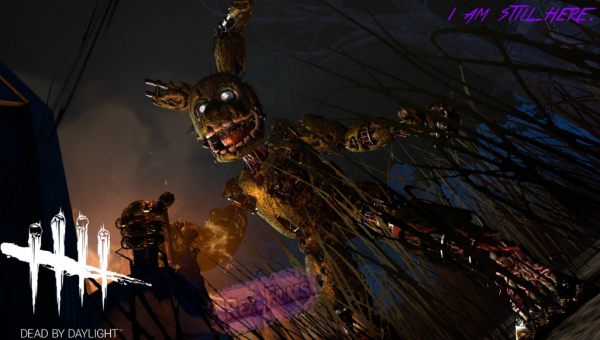 (Photo : Screenshot from Twitter post of @films_rex)
‘Dead by Daylight’ Chapter 2 Leaks: 'FNAF' Springtrap, 'Hellraiser' Pinhead as New Characters; Who Would Be the New Killer?

However, Microsoft and Behaviour Interactive still haven't announced these new killers since they only came from leakers spreading rumors about various popular titles.

Aside from Springtrap and Pinhead, other speculations also claimed that Candyman or Spiral could also be the new killers in the game. However, only one of them could arrive in the horror title.

According to HITC's latest report, there were already some hints pointing to Springtrap as the new killer of "Dead by Daylight." However, these were contradicted after the game released new teasers about Pinhead being the new character of "DBD" Chapter 2.

(Photo : Screenshot from Twitter post of @DeadByBHVR)
‘Dead by Daylight’ Chapter 2 Leaks: 'FNAF' Springtrap, 'Hellraiser' Pinhead as New Characters; Who Would Be the New Killer?

🍺 Everyone who's grabbing a drink at the Dead Dawg Saloon today, raise your hand. ✋

Not so fast. The Saloon is closed for renovations (disabled) until we patch up some holes. pic.twitter.com/IK1ZqESEFr

Right now, Pinhead is the strongest candidate for the new killer. A Japanese Twitter account, which is very popular on "Dead by Daylight" leaks, claimed that they tried to merge the audio files from the game's latest teaser using spectrogram.

After that, they discovered that the result formed the word "Hell," which could be the hint of the "Hellraiser" villain's arrival on the game.

As of the moment, the latest tweet of the leaker was able to generate more than 3,800 likes, 260 quote tweets, and 330 retweets.

In other news, some rumors claimed that the "GTA" Remastered Trilogy could be on its way. On the other hand, Nintendo Indie World Showcase could bring new Indie titles.

Other Updates of 'Dead by Daylight'

PC Gamer recently reported that the new patch of "Dead by Daylight" enhanced the visual output of Pyramid Head, one of the villains in "Silent Hill."

This update specifically improved the flat rear of the character, making him more appealing.

Many fans are now satisfied with the change implemented by Behaviour Interactive since they claimed that the actual character in the game is very different from the one showed in promotional materials.

For more news updates about "Dead by Daylight" and other popular horror games, always keep your tabs open here at TechTimes.