Apple's office return mandate for its employees is facing yet another push back as the COVID-19 cases rise again due to the more transmissible Delta strain, as per the latest memo that the Cupertino giant sent to its workers. 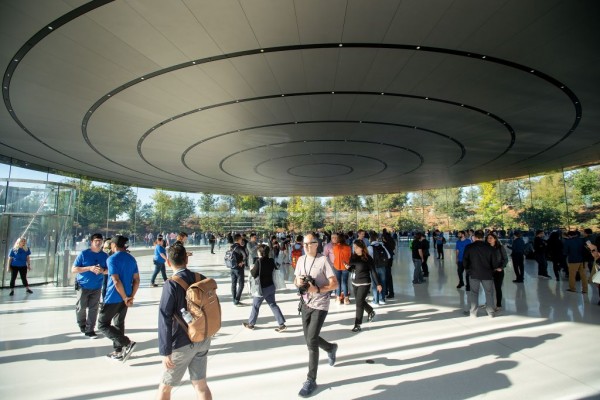 (Photo : by NOAH BERGER/AFP via Getty Images)
Attendees gather for a product launch event at Apple's Steve Jobs Theater on September 12, 2018, in Cupertino, California. - New iPhones set to be unveiled Wednesday offer Apple a chance for fresh momentum in a sputtering smartphone market as the California tech giant moves into new products and services to diversify.

According to Bloomberg, the memo to the employees was sent by the human resources and retail senior vice president of Apple, Deirdre O'Brien, on Aug. 19, noting that all retail stores and its offices will remain operational.

The Apple exec further acknowledged the frustrations that their staff must be experiencing as the pandemic still prevails, as per The Verge. She added on the memo that: "For many colleagues around the world, this period has been a time of great tragedy, suffering, and heartbreak."

O'Brien further assured the employees of the iPhone maker that they are there to support one another as they face the wrath of the novel coronavirus. On top of that, the memo also encouraged Apple employees to get their vaccination to protect themselves from the infection of COVID-19.

It is worth noting that Apple has yet to require vaccinations as well as testing for their employees. However, the tech company hosts a testing program, which regularly tests its employees at least once a week.

Apple has yet to comment on the internal memo that reached the public.

Previously, the Cupertino giant was not a fan of the working from home setup for most of its employees. However, the stance of the tech titan changed later on.

The Apple CEO, Tim Cook, raised the possibility of a hybrid working system, wherein staff will be required to report in the office for at least three days a week.

Initially, the hybrid model was supposed to begin by September, but it has since been moved to October--and now it is most likely to be  delayed again until January next year.

It is to note as well that employees of the Cupertino giant strongly denounced the hybrid setup of the tech titan, proposing an option to opt to work from the confines of their homes.

Some Apple employees even threatened that they might be forced to quit the company if there is no option for them to do their responsibilities remotely.

On a more optimistic note, the data shows that nearly 5 billion people have already gotten their vaccine across 183 countries worldwide.