‘Legend of Zelda' Rare, Sealed Donated Copy Sells for $411,000 For a Good Cause at Goodwill

The "Legend of Zelda's" rare copy, which someone donated, was sold for a hefty price, but the profit was for a good cause. It was auctioned via Goodwill, a non-profit organization in America. 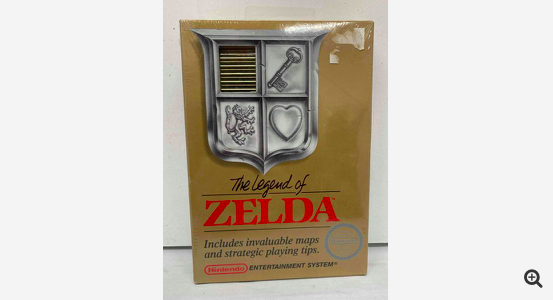 (Photo : from Goodwill Website Listing )
“Legend of Zelda’s” rare donated copy sold for $411,000 for a good cause at Goodwill as auction of the classic Nintendo game concludes.

The donation by an unnamed person turned out to be a factory-sealed copy of the iconic Nintendo game, "The Legend of Zelda," from 1987.

According to the listing of the donated game at Goodwill, even though it is still sealed, the plastic already collected a couple of scratches as well as smudges. Also, the sticker has already peeled off in its right corner due to its age.

On top of that, there are visible dents on the box of the game, creating an opening on the corner of the packaging.

What's more, the rare copy of "The Legend of Zelda" also did not include any grading certification.

And of course, as the item is notably factory-sealed, the listing clarified that the game has not been tested if it still works with the original Nintendo console.

Nevertheless, by the looks of it, the sealed "The Legend of Zelda" donation looks clean and pristine for its age based on the photos that the Goodwill listing provided. It is rare to see this vintage game in this kind of condition.

Meanwhile, TMZ highlighted that the auctioned game is older than the non-profit org, Goodwill, which was established in 1999. To put into perspective, it has been 13 years since "The Legend of Zelda" debuted.

The outlet further added that the vintage copy of the Nintendo game title is now the most expensive item that has been auctioned via the online shop of Goodwill.

'The Legend of Zelda' Donation Sold

Goodwill's of Western and Northern Connecticut sold the rare copy of the video game in an online auction house of the non-profit at a whopping $411,278, plus a handling price of $3.50. The bidding closed on Aug. 18, Wednesday.

The final day of the auction drew the most bids in a single day, starting at a whopping $82,000. The last bidder only won to the previous bidder by a single dollar.

Goodwill assured that the hefty sum of the auction will be used for a worthy endeavor, helping job seekers across surrounding communities as the COVID-19 pandemic has purged some employees due to the lockdowns.

Meanwhile, another rare copy of "The Legend of Zelda" previously sold for a record-breaking $870,000. And elsewhere, another hard-to-find Nintendo game, "Super Mario Bros 3," was also auctioned for a cool $156,000.

Related Article: 'The Legend of Zelda: Skyward Sword HD' to Launch Game with Amiibo Figure on July 16-Where to Buy?