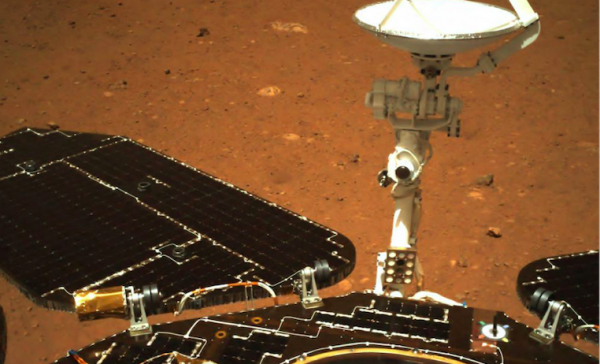 (Photo : by -/CNS/CNSA/AFP via Getty Images))
This picture released on May 19, 2021, by the China National Space Administration (CNSA) via CNS shows an image taken by the navigation camera of China's Zhurong rover on the surface of Mars, showing the rover's solar panels and antenna, after it landed on Mars on May 15, 2021.

It is important to point out that China's Zhurong was originally designed to last for 90 Martian days, also known as "sols," or a total of 92 days on our planet.

To note, a day on the Red Planet is slightly longer than here on Earth with an additional 40 minutes.

The initial mission of the Chinese Mars rover was to roam around the red planet in hopes of stumbling upon any clue of life outside Earth.

It is tasked in getting any sample of frozen water on the red planet, which highly suggests that the planet was previously home to living creatures.

Now, the Associated Press reported that the China Mar's Rover will not cease exploring the rocky terrain of the Utopia Planitia even as 90-days have already passed since it started its mission last May 14.

Since then, Zhurong has already traveled a cool 889 meters on Mars. Not to mention that the Chinese rover has already sent a vast amount of raw data totaling 10 gigabytes, as per the New York Post, citing state-owned Global Times.

Aside from the continued exploration of Mars, China is also erecting its permanent space station.

As of now, a total of three astronauts are boarded by the Chinese spacecraft that goes by the name Tianhe, or also known as the Heavenly Harmony core.

Two of them have already commenced their spacewalk on Aug. 20.

As such, the whole crew is set to go back to Earth in the next month for a much-needed replacement of astronauts.

It is worth noting that China has been excluded from the International Space Station. As such, the Asian country is forced to assemble its own version of it.

The Chinese remote-controlled rover started its exploration on Mars on May 22 after it exited its landing platform.

Since then, China's Mars rover has already sent audio, photos, and even video recordings from the Red Planet to the Earth. It even sent a selfie of itself while boasting the flag of the Asian country on the red and rocky surface of the planet.

With that, Elon Musk and even NASA's Senator Bill Nelson congratulated China's space agency for the first images of the Zhurong Mars Rover on Mars. It comes even if the United States is a close rival of China in space explorations.