Mars missions seem to be all the rage these days, and China is now officially part of all the action.

Their Mars rover Zhurong just sent its first photos and video of the surface of the Red Planet, which shows the robot's landing, deployment, and initial movement, reports Engadget. So far, Zhurong has covered 774 feet from its landing platform and is preparing to conduct more experiments on the Martian surface. 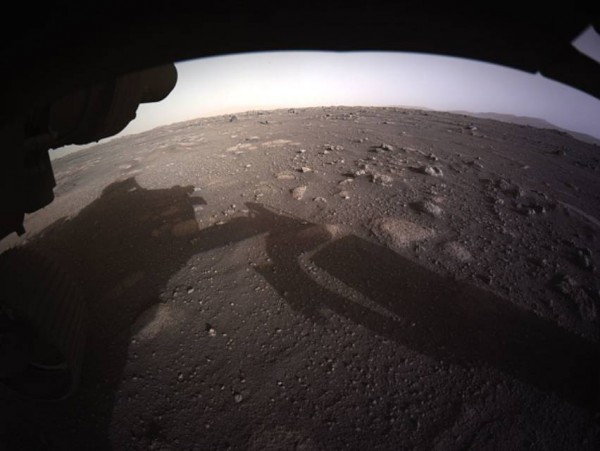 (Photo : NASA via Getty Images)
JEZERO CRATER, MARS - FEBRUARY 18: In this handout image provided by NASA, the first high-resolution, color image to be sent back by the Hazard Cameras (Hazcams) on the underside of NASA’s Perseverance Mars rover after its landing in the area known as Jezero crater on February 18, 2021 on the planet Mars.

The Chinese space agency has released these images and videos onto their website, which can be accessed for free. A portion of the video was also shared by China's state news agency, which lets people hear the first sounds recorded by the Mars rover and also shows it driving away.

Launched as part of the Tianwen-1 mission, Zhurong first landed on the Red Planet on May 14 after being launched back in July 2020, reports Space.com. The Mars rover is going to use six scientific payloads to study the planet, including its microphone, whose job it is to record what the winds sound like there.

According to deputy commander Liu Jizhong of the Chinese Martian exploration program, the Zhurong rover was able to conduct a deeper analysis of the environmental conditions on Mars, like the density of the planet's atmosphere. While he didn't share anything further about the rover's mission, it's safe to say that Zhurong will be conducting more experiments during its stay.

It's also worth noting that much like what happened with NASA's Perseverance rover, the Zhurong rover also experienced the so-called "few minutes of terror" as it landed on the Utopia Planitia region of Mars. However, the Chinese lander had it a little bit worse. While NASA endured seven minutes when they lost total control of the lander, China had to sit through 9 minutes of that.

Mars Missions from the Far East

China's series of Mars missions is only beginning. According to their roadmap, they want to ensure consistent development of human bases there during the 2030s and well into the 2040s.

Joining the likes of Western space agencies, the CNSA unveiled plans for far more complex missions to the Red Planet. ABCNews reports that the country is planning to send humans there and actually build a base on the Martian surface. These plans were revealed at a recent space conference, which was held in Russia. The Chinese government aims to make this mission a reality by 2033.

But while the date is a little later than what most Western space programs predict (SpaceX's Elon Musk plans to send people to the Red Planet by 2033), it's still a major achievement. The United States and Europe largely dominate the space exploration industry, and it's about time that a major Asian power joins in.

It looks like Mars won't be keeping its secrets hidden away for much longer.

Related: NASA Ingenuity, Perseverance to Look for 'Ancient Life' on Mars, After Moving on to a New Landing Site

Elon Musk 'Mars City:' Humans to Fly Out Before 2030, Mars Base Alpha 'Self-Sustaining'—What Is Missing?