"Cyberpunk 2077" got its first taste of DLC after a long wait, but fans are still not satisfied. Several people took it upon themselves to datamine the game, and they came up with rather interesting (yet unconfirmed) information. 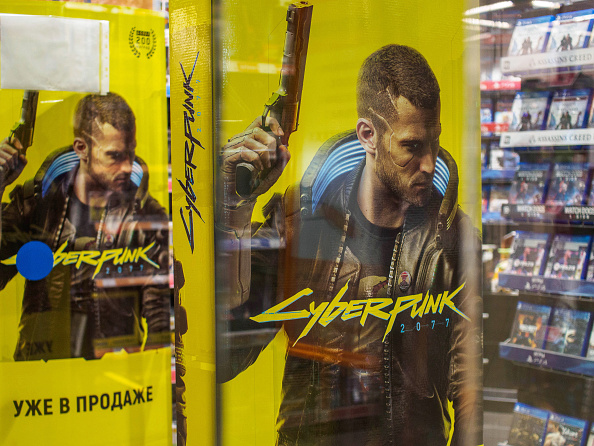 (Photo : Alexander Sayganov/SOPA Images/LightRocket via Getty Images)
MOSCOW, RUSSIA - 2020/12/10: Cyberpunk promo seen at the entrance to the video game store. Cyberpunk 2077 is a 2020 action role-playing video game on sale worldwide. In Russia it has become the most anticipated game in 2020.

According to a report by VideoGamesChronicle, dataminer and YouTuber Tyler McVicker managed to extract some information about the rumored next DLC and gameplay additions for "Cyberpunk 2077," namely two story expansions and a multiplayer mode. This is after the last big patch for the game, which is Patch 1.3.

McVicker's analysis led him to assume that the expansions are mentioned twice in the files, alongside so-called "multiplayer gyms" and several tests. He also found references to "old" multiplayer modes, which could mean that CD Projekt Red originally planned to make an online "Cyberpunk" game.

Here is the video posted by McVickers on his YouTube channel, where he discusses the results of the "Cyberpunk 2077" datamine:

There's not much information about the story DLCs aside from fleeting mentions that the datamine extracted. The online multiplayer mode, however, seems to have the most meat. It's worth noting that back in March, CD Projekt Red clarified their approach to online functionality, stating that the studio wants to have online in their future games "step-by-step," reports Eurogamer.

Allusions to a planned "Cyberpunk 2077" multiplayer mode were also extracted by dataminers back in January, though the game's publisher has been very mum about its actual plans.

Read also: 'Cyberpunk 2077' Is Still Selling Well on PS4 Despite Warnings from Sony

"Cyberpunk 2077" added its first free DLC with Patch 1.3, though it seemed like fans didn't like the extras that much. It's likely one of the reasons why fans are datamining the game for hints of big expansions like what the "The Witcher 3" had (i.e. "Hearts of Stone" and "Blood and Wine").

This made CD Projekt feel like they had to defend the said DLC they included with the 1.3 update. According to ComicBook.com, studio senior level designer Miles Tost said that the team exerted a lot of effort into bringing Patch 1.3 live. The free DLC they included was supposed to be the "cherry on top."

He then went on to explain that the studio differentiates between types of extra content like free items, story DLCs, and others which they say will be plentiful down the line. Tost finishes with a confirmation that CD Projekt will be talking about story expansions "later," and nothing else.

CDPR might not be willing to give up on "Cyberpunk 2077" yet, but they're surely playing their cards close to their chests.

Since it looks like the game won't be getting anything big after patch 1.3 anytime soon, modders are picking up where CDPR left off for "Cyberpunk 2077." They're coming up with multiple fixes for the game's still unpatched bugs, as well as gameplay additions that they feel like adds way more to "Cyberpunk" than what CD Projekt can give it right now.

Related: Cyberpunk 2077's De-Listing on the PS Store Helped its Sales on Other Platforms: Reports