'Stardew Valley' is Having its First-Ever Esports Cup in September--Prize Pool Hits $40,000 According to Creator

"Stardew Valley" will stage its upcoming eSports event next month, according to its game creator, Eric Barone who is also known as ConcernedApe.

The tournament will be the first-ever competition that the farming sim game will introduce to all the players. 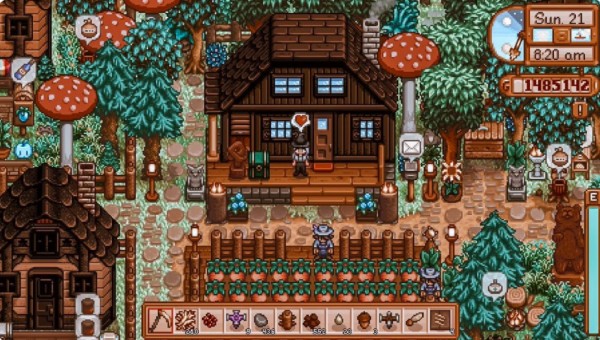 (Photo : @Simplehylian)
'Stardew Valley' will be holding its first official tournament next month. What could be the challenges that await the teams in this tournament?

According to a report by GameSpot, the first official eSports tournament for "Stardew Valley" will be called the Stardew Valley Cup.

On Sunday, Aug. 22, Barone tweeted that a prize pool of over $40,000 will be won by the winners. Other mechanics were announced soon as well.

Barone added that there would be four teams that would compete in the tournament. Each team should have four players. The participants of the Stardew Valley Cup will be composed of game streamers and other enthusiasts.

The winning team will be the one who will garner the most number of points after accomplishing several in-game tasks. The game creator also noted that he would host the competition together with a "Stardew Valley" content creator, Zach Hartman, who is best known as "Unsurpassable Z."

In collaboration with @UnsurpassableZ, I'm pleased to announce the 1st official Stardew Valley Cup! It's a competition of skill, knowledge, and teamwork, with a prize pool of over $40k. See some of Stardew's most dedicated players in their element! Main event is Sept. 4th 9am PST pic.twitter.com/qtDW5e5LvD

A Glimpse of 'Stardew Valley' Mechanics

In a YouTube video, Hartman laid out some important details about the upcoming esports cup.

According to the game streamer, the teams should engage in a series of 100 challenges within three hours. All of them would hail from the beach farm as their starting point.

There will be easy and hard tasks that teams should prepare for. It could be as easy as finishing the mission inside a special room, or it could be hard through seeking mines. There are corresponding points for every challenge depending on their difficulty.

Unsurpassable Z said that before the tournament takes place, they would give each team a two-week preparation. This would cover strategy, decision-making, and brainstorming of plans inside the game.

The twist about this Stardew Valley Cup would be the appearance of hidden challenges that would remain a mystery for each team.

Slashgear reported on Monday, Aug. 23, that the most awaited "Stardew Valley" event will be staged on Sept. 4 at 9 AM PT (12 noon ET). Throughout the tournament, Barone and Hartman will serve as the game commentators.

The "Stardew Valley" Cup will last for three hours, however, teams should take note that there's no limitation to the in-game days for all players.

Barone said that the $40,000 prize pool will be divided by the four teams. The top-performing squad will be able to pocket $28,000 for its four members.

Since January 2020, "Stardew Valley" has recorded its massive success after more than 10 million copies of the game were sold globally. Many people were hoping for this sim game to be an official esports. This time, it came true for the avid fans and dedicated streamers.

For Xbox gamers, the game is expected to be the Xbox Game Pass in the latter part of 2021.

For those who missed the "Stardew Valley" Studio Ghibli mod on 2020, you can visit the "Ghibli Critters" website to install the mod.