Hubble is back in business after a long while being offline, and now it's doing what it does best: make amazing discoveries about the universe regularly.

Hubble's newest discovery is a photograph it took of a cosmic phenomenon known as an "Einstein Ring" situated billions of light-years away, NBC News reports. It was named after the famous 20th-century physicist whose theories included predicting that gravity, if powerful enough, can bend even light.

The photograph released by the European Space Agency (ESA) reveals a round object at the center. While the picture seems like it's showing the light that's forming a ring, the story behind it is even more interesting. Here is the image, which comes straight from NASA: 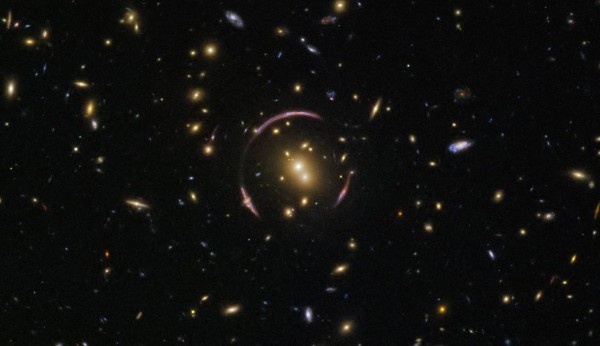 What you actually see in the image is three galaxies that appear like there are seven of them, featuring four different images of the most distant of these galaxies forming a ring around the others. The farthest galaxy of the bunch is a mind-boggling 15 billion light-years away. It's also a very specific type of galaxy because it has a gargantuan black hole in its center which is called a quasar.

The three galaxies are appearing as if they're seven because of their light passing through intense gravitational fields, causing them to bend, writes ScienceAlert. Hubble was among the earliest telescopes to actually witness any sign of this phenomenon since telescopes in Einstein's time weren't powerful enough.

An Einstein Ring was first seen in 1979 when astronomers at Arizona's Kitt Peak Observatory identified the quasar in the image as Twin Quasar QSO 0957+561. They knew it was a single quasar despite appearing to be two because the light that produces its image is passing through an immense gravitational field from another galaxy close to it.

Hubble's Newest Discovery is Far More Interesting Than it Appears

Seeing the image, an ordinary person might be saying, "so what?" Well, that's because the context is far bigger than most could imagine. And it begins and ends with the distance of the quasar that's causing the Einstein Ring to form.

15 billion light-years is a distance that's hard to wrap your head around. But considering that scientists estimate the entire universe's age as 14 billion years, we're at a 1 billion-year deficit here. So why is this Einstein Ring-causing quasar seemingly "older" than the entire universe itself, and how did Hubble even capture its image?

Hubble technically cannot capture an image if it doesn't give off light. But since the farthest galaxy's light is curved by the gravitational pull of the two galaxies in front of it. This, however, can only be detected by analyzing the Hubble Space Telescope's numerical data.

With this new discovery from the iconic Hubble Space Telescope, scientists are able to see further back into time than ever before. This could reveal several unknown secrets of the universe's origins, for one, which, if confirmed, will be massive enough to change the course of science. 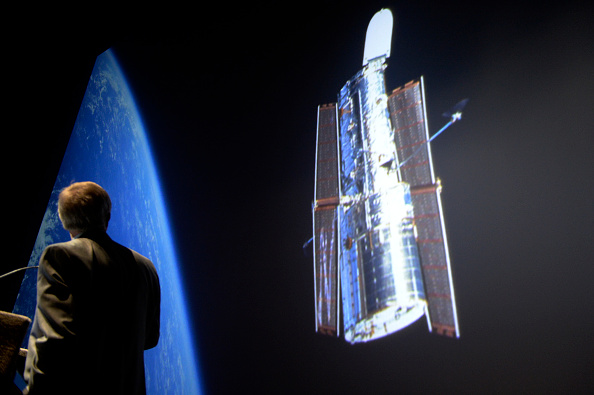 (Photo : Brent Lewis/The Denver Post via Getty Images)
DENVER, CO - April 21: Department Chair & Curator of Planetary Science Steven Lee looks up at an image of the Hubble Telescope on Tuesday, April 21, 2015 at Denver Museum of Nature and Science in Denver, Colorado. The event brought together many of the Colorado minds that were involved in the creation and repair of the Hubble Telescope which is celebrating it's 25th anniversary this month. The anniversary included discussions from retired NASA astronaut Bruce McCandless II, principal mechanical design engineer for Ball Aerospace and Technologies Kristin Martinez, vice president at Space Systems International James Crocker, and professor and chair of the Department of Astrophysical and Planetary Sciences at the University of Colorado Dr. James Green.

Related: IN PHOTOS: The Different Galaxies the Hubble Space Telescope Has Taken Photos of in the Last 3 Decades