The smart clothing industry has created a special smart shirt that can function as a heart rate monitor and can conduct an electrocardiogram (ECG) to the user. 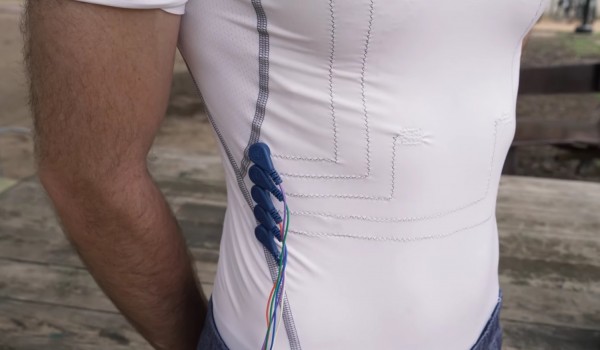 (Photo : Rice University from YouTube)
The Rice University lab researchers developed a smart shirt that has carbon nanotube fibers. It can conduct ECG and heart rate monitoring for the user.

In a study entitled "Washable, Sewable, All-Carbon Electrodes and Signal Wires for Electronic Clothing" published in ACS Publications on Monday, Aug. 30, that simple apparel can monitor a person's heart rate.

Through the use of nanotube fibers, the smart shirt provides next-level comfort to the user.

The researchers also noted that it would be "less likely to break" when the person moves.

Smart clothing has even become a good instrument for data gathering during trials. The carbon nanotube-infused shirt also yields results that is "slightly better" than the usual medical electrode monitors when it comes to ECGs.

According to the study's lead author, Lauren Taylor, the next area that they will focus on is the dense carbon nanotube patches for the user's skin.

As for the innovators, the smart shirt features a durable fiber, but it is also flexible and soft for clothing.

Moreover, Taylor said that the smart shirt also allows Bluetooth connection, thanks to its electrodes that can send data to the user.

Matteo Pasquali, the biomolecular engineer behind this smart clothing, has brought the carbon nanotube fiber back in 2013. In his lab, the researchers have explored the potential uses of this component, including health implants, heart damage repairs, antennas, and even aerospace technology.

Originally, the said nanotube is too thin at nearly 22 microns wide.

According to Taylor, they have collaborated with a person who is an expert in creating ropes for model ships, Phys.org reported.

At that time, the mentioned individual was said to develop a "medium-scale" device that works similarly with the little machines. The researchers stated that modern fibers can now be incorporated with LEDs. This paved the way for them to come up with clothing that could monitor heart rate and perform ECG.

Currently, the market of wearable technology remains small compared to other smart markets.

At this point, the scientists are continuously developing many materials centered on user's comfort using nanotube fiber.

The field of smart clothing is indeed becoming a hot trend in the field of health technology. While the previously mentioned smart shirt can monitor heart rate, some of its kind can perform unusual tasks.

For instance, Virtuali-Tee's smart shirt can tour the user inside a human body through a QR code. Regardless of the platform, whether it is Android or iOS, the users can download it through their smartphone, tablets, and other gadgets.

When the users finish scanning the QR code, they will be directed to the Virtuali Tee website, which will show the body's animated 3D model.

You could also see it in X-ray style.

In 2014, another smart apparel has become a lifesaver for the users. At that time, two graduate students from New York University's Interactive Telecommunications Program developed a smart hoodie that can detect body gestures.

It could also send text messages to the family members of the users.