The National Aeronautics and Space Administration (NASA) has been able to map out the power outage in New Orleans with the help of its satellites.

The scientists who worked on the maps are from NASA's Goddard Space Flight Center as well as the Universities Space Research Association (USRA).

Hundreds of thousands of people are currently without power in Louisiana and Mississippi. There have also been reports of gas and water shortages in the area. 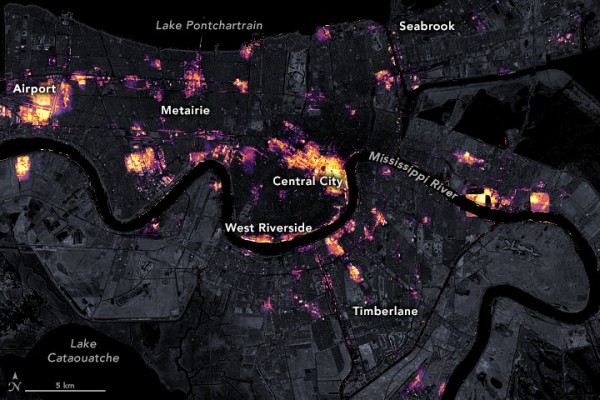 NASA's satellites have been able to map out the power outage residents in New Orleans are experiencing due to the damage caused by Hurricane Ida.

The Landsat 8 satellite, meanwhile, provided the data used for the base maps of New Orleans.

Miguel Román, a USRA scientist, said that "the imagery is surprisingly cloud-free. It usually would take at least 48 hours for skies to clear up enough after an event like this."

Part of the 2021 Atlantic hurricane season, Hurricane Ida hit Louisiana 16 years to the day that a Category 5 hurricane infamously known as Hurricane Katrina also made landfall in the state.

Maxar Technologies' Worldview-2 satellite has been able to capture images of the damage caused by Hurricane Ida in different cities and towns of Louisiana. These include Jean Lafitte, Houma, and La Place.

According to a report by Space, images taken by the Worldview-2 satellite show "apartment complexes and other buildings with roofs torn to kindling by Ida's fury. Floodwaters submerge the streets and yards of Jean Lafitte."

How Long Will the Power Outage Last?

Per a report by CNN, the power outage in Louisiana "could last at least a month" as the state tries to recover from the damage caused by Hurricane Ida.

The lack of power is turning out to be a huge problem especially as the summer heat continues.

According to CNN, temperatures in southeast Louisiana in southern Mississippi can hit the 90s with "with heat indices -- what the temperature feels like with humidity and other factors -- of up to 108 degrees."

Hurricane Katrina, 10 Years After: Images Of Destruction And Recovery