The solar system still has only eight confirmed planets that are orbiting the sun. It recently had nine planets, but it all changed after NASA and other space agencies decided to demote Pluto to a dwarf planet. 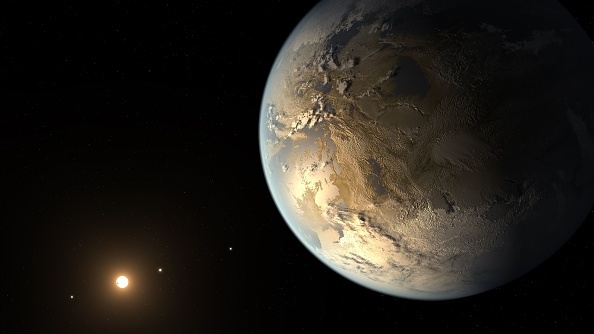 (Photo : Photo credit should read NASA/JPL-CALTECH/T. PYLE/AFP via Getty Images)
This artist's concept obtained October 30, 2018 courtesy of NASA/Ames/JPL-Caltech/T. Pyle shows Kepler-186f, the first Earth-size planet in the habitable zone. - After nine years in deep space collecting data that indicate our sky to be filled with billions of hidden planets, NASAs Kepler space telescope has run out of fuel needed for further science operations.

Some experts argued that Pluto is an icy asteroid that is orbiting the sun farther than Neptune. However, more reliable astronomers said it is still a dwarf planet since its size is too big to be classified as an asteroid.

On the other hand, various scientists believe that there is still a ninth planet orbiting the sun. They also claimed that it has an orbital period of 18,500 Earth years. However, scientists were still unable to provide strong evidence that the so-called Planet Nine really do exists.

A new study, created by the U.S.-based California Institute of Technology or Caltech, said that their new simulation map shows that the ninth planet in the solar system could be closer than recently estimated.

According to National Geographic's latest report, Caltech experts created a new simulation called Treasure Map, which suggests that the planet is larger compared to Earth. 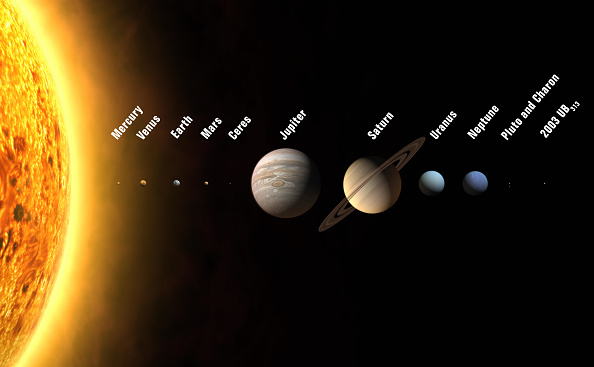 (Photo : Photo credit should read IAU/AFP via Getty Images)
An artist's rendition shows the solar system with 12 planets, including three new ones to be added if astronomers meeting in the Czech capital approve a new planetary definition, the conference organizer said 16 August 2006. The proposal before the 26th general assembly of the International Astronomical Union distinguishes between eight classical planets and three bodies including Pluto.

On the other hand, the data gathered also showed that Planet Nine is hard to identify since it is hidden behind the bright strip stars of the Milky Way Galaxy.

In the new study titled "The orbit of Planet Nine," which was published in the Arxiv Org journal, Caltech astronomers Konstantin Batygin and Mike Brown explained that their new Treasure Map simulation shows the location of the ninth planet.

Batgyin and Brown explained that instead of 18,500 Earth-year orbital periods, the new planet only orbits the sun in 7,400 Earth years, as reported by ExtremeTech. This is a major finding since the orbital period is another factor to determine the distance of a heavenly body orbiting a star or another space object.

"I think it's within a year or two from being found," said Mike Brown.

As of the moment, Planet Nine is still not included as part of the solar system. Space fans should still wait for stronger evidence until NASA approves this idea.

In other news, Hubble Space Telescope captures the unusual Herbig-Haro object. On the other hand, NASA claims the SpaceX satellite launch could be delayed because of a liquid oxygen shortage.

For more news updates about the Planet Nine and other heavenly bodies, always keep your tabs open here at TechTimes.

Related Article: SpaceX's Latest Cargo Mission on ISS Delivers Birthday Gift to Astronaut-Here's What She Got