"Horizon Forbidden West" players on PS4 will be out of luck if they ever want to upgrade their experience to PS5 down the line. 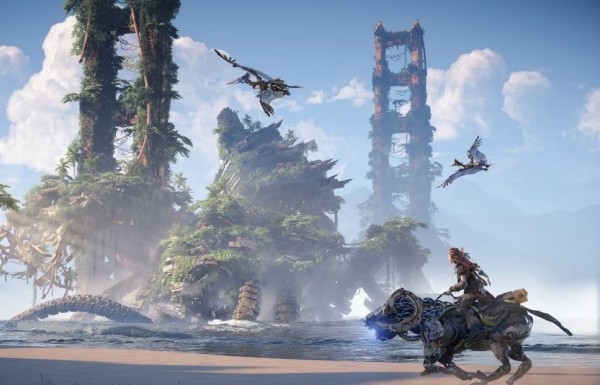 According to a report by Polygon, the sequel to the award-winning "Horizon: Zero Dawn" from Guerilla Games won't be offering a direct PS4 to PS5 upgrade. For some reason you want to play both the next-gen and last-gen versions of the, you'll need to buy an $80 Digital Deluxe Edition.

This was announced in an official blog post on the Sony PlayStation website, wherein special collector's editions of "Horizon Forbidden West" were detailed.

But while the PS4 version of "Horizon Forbidden West" will be playable on the PS5, it will lack several features which are exclusive to the next-gen console.

Developer Guerilla Games calls this "dual entitlement" (aka players having the option to access both the PS4 and PS5 versions). This dual entitlement option is not available on the Standard and Special editions of the game, according to a report by IGN.

Naturally, this has gotten some PS4 owners up in arms, who are saying that Guerilla's decision to lock Standard and Special edition players on PS4 out of a PS5 upgrade is not according to the promise made by Sony Interactive Entertainment head Jim Ryan.

Ryan was previously quoted as saying that while PS5-exclusive games will be "built from the ground up" for their current-gen console, they're giving PS4 users an upgrade path to get PS5 versions for free. This statement was made during Jim Ryan's interview with The Washington Post earlier this year.

'Horizon Forbidden West': Does a PS5 Upgrade Even Matter That Much?

With this debacle, "Horizon Forbidden West" is now one of the few AAA PS-exclusive games that won't offer a free PS5 upgrade from its PS4 version. But would it really matter that much when the game releases next year?

You would probably be surprised to know that much of the development work on "Horizon Forbidden West" was done on a PS4. This was revealed in a report (via a Game Informer interview). "Forbidden West" game director Mathijs de Jonge said that the game was designed with the PS4's hardware in mind. They also did a lot of the playtests on the last-gen Sony console.

But the devs likely did that because they decided that it's easier to upgrade a game for newer hardware than downgrade it for an older one. As such, they planned to go much further with the PS5 version of "Horizon Forbidden West." They talked about better water rendering tech on next-gen, an improved cinematic-grade lighting system that can only be used in cutscenes on the PS4, as well as 3D audio and extra input options on the DualSense controller.

In other words, playing "Horizon Forbidden West" on the PS4 is still going to be a great experience. You won't be left out much, last-gen console owners.