Microsoft Surface Go 3 will reportedly launch during the Sept. 22 event of the tech giant. The specs of the upcoming device have also been leaked ahead of its official reveal. 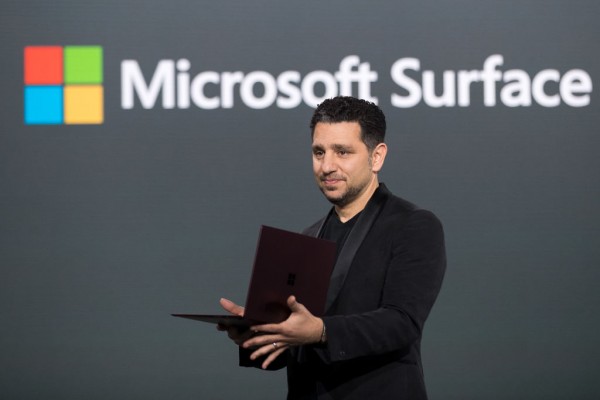 (Photo : by Drew Angerer/Getty Images)
NEW YORK, NY - MAY 2: Panos Panay, vice president of Microsoft Surface Computing, speaks about the new Microsoft Surface Laptop during a Microsoft launch event, May 2, 2017 in New York City. The Windows 10 S operating system is geared toward the education market and is Microsoft's answer to Google's Chrome OS.

As per TheNextWeb, there have been rumors that are predicting that the Surface Duo 2 will launch alongside the Surface Book Go 3.

However, a German news outlet, WinFuture, noted that only one device is sure to be part of the Sept. 22 event--the Surface Book Go 3.

The Surface Go 3 sports a cheap price along with its small size, making it a common choice for students or professionals who are looking for an alternative tablet to use aside from their primary devices.

Based on the leaked specs of the upcoming Surface Go 3, it looks like it will stay true to its brand, carrying a 10.5-inch display with an FHD resolution.

However, the most significant difference that the new Surface Go will be flaunting compared to its predecessor, the Surface Go 2, will be its new sets of processors.

It is worth noting that the Surface Go 2 was launched alongside another device--the Surface Book 3, last May 6, 2020.

The latter was touted to be the direct competitor of Apple's MacBook Pro.

Meanwhile, the first version of the Surface Go tablet launched as the cheaper and weaker counterpart of the Surface way back on July 10, 2018. The pioneering installation of the budget tablet likewise sported a 10-inch display--a point five increase to the upcoming release.

Read Also: Microsoft Admits Surface Laptop 3 Cracks Screen; Here's What You Should Do to Fix it

According to GizmoChina, the Microsoft Surface Go 3 will be released with two kinds of SoC--both from Intel.

An Intel Pentium Gold 6500Y processor paired with 4GB of RAM will be powering the first model of the Surface Go 3. On the other hand, another version of the tablet will be flaunting an Intel Core i3-10100Y along with 8GB of RAM.

It is worth noting that the new i3-10100Y of Intel belongs to the Amber Lake Y series that sports a power-saving feature.

What's more, the Surface Go 3 will also be fanless. Not to mention that the chassis of the tablet will no longer be featuring any moving parts inside.

On top of that, the upcoming Microsoft Surface tablet will be installed with a Windows 10 Pro 64-bit straight from the box.

To compare to the previous Surface Go 2, the upcoming device's Intel Pentium 6500Y garnered an impressive 62 percent increase from the multi-core performance of the former's Pentium Gold 4425Y.