Robot "police" have been deployed in public areas in Singapore where there's a lot of foot traffic, in an attempt to seek out "undesirable social behaviors." 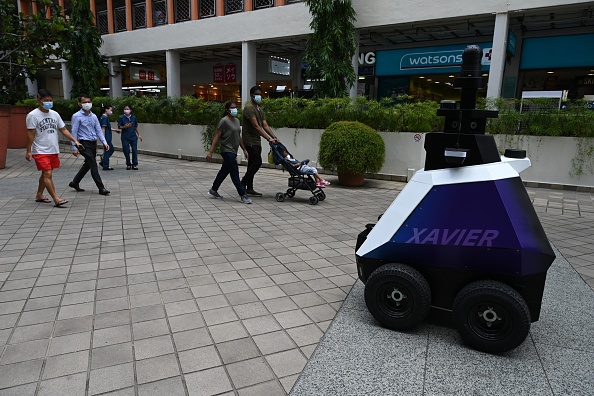 (Photo : ROSLAN RAHMAN/AFP via Getty Images)
A robot patrols a shopping and residential district during a three-week trial by Home Team Science and Technology Agency (HTX) in Singapore on September 6, 2021, reminding people to observe proper social behaviour such as not smoking in public and not to gather in more than groups of five.

According to a report by Engadget, the robot, named Xavier, will monitor crowds at the highly active Toa Payoh Central area to keep an eye out for any rule breakers.

This includes people who break the country's COVID-19 regulations by congregating in groups of more than five people.

Aside from mass gatherings, Xavier the patrol robot will also be on the lookout for smokers in non-smoking areas, as well as street hawkers with no permits.

Illegally parked bicycles or mobility devices will also be flagged.

As soon as the robot detects these violations, it will notify human officers in its command center, as well as display a message on its screen to remind the public to obey the laws.

Xavier the robot will be doing its job using an array of 360-degree cameras, which are powerful enough to take photos in low light conditions using infrared.

Aside from that, the video that the cameras capture will be analyzed by an AI system, which could require human input from time to time.

Robot Patrol: How Long Will It Last?

According to a report by Reuters, the robot patrol officers (two of them) are currently on a three-week trial. But Singaporean authorities did state that they wouldn't be using the robots for actual law enforcement during the trial.

A spokesperson from the Singapore Home Team Science and Technology Agency says that while Xavier the robot will only be used for surveillance for now, their long-term goal is to "reduce the required manpower" to enforce laws and improve the efficiency of operations. 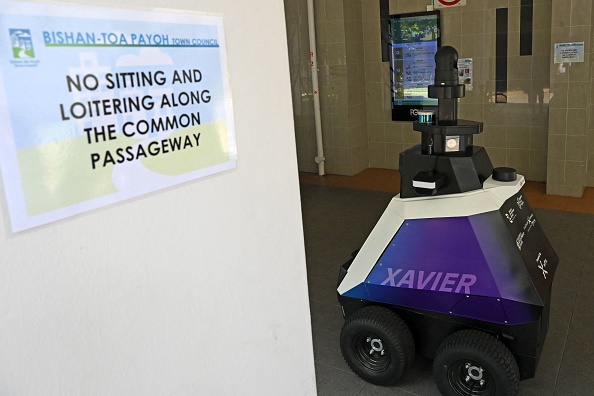 (Photo : ROSLAN RAHMAN/AFP via Getty Images)
A robot patrols a shopping and residential district during a three-week trial by Home Team Science and Technology Agency (HTX) in Singapore on September 6, 2021, reminding people to observe proper social behaviour such as not smoking in public and not to gather in more than groups of five.

In any case, a full deployment of these robots in public places would augment the city-state's plan to employ over 200,000 police cameras by 2030.

Known for being one of the safest places in the world, Singapore's long-term plan would do quite well in their efforts to ensure the safety of their citizens.

The Implications of Law-Enforcing Robots

Xavier the robot is no Robocop, but it sure does open a lot of avenues in the use of autonomous machines to help law enforcement.

Right now, there are specific technologies that could be used to improve a robot like Xavier to help it perform its job better.

What about enough dexterity to, say, chase down bad guys?

Well, the guys at Boston Dynamics created robots that can do parkour, for one. And they're doing it far better than most average humans can do, though they clearly won't be chasing down agile parkour athletes any time soon.

The Xavier robot is equipped with wheels instead of legs. Those wheels seem to be serving their purpose well, but their mobility will be limited when they have to deal with rough surfaces and stairs, for instance.

But who knows whether Xavier will get an upgrade in the future?

Related: Tesla Bot Was Created by Elon Musk to Ensure Safety in All Robots, Present a Good AI to the World

ⓒ 2021 TECHTIMES.com All rights reserved. Do not reproduce without permission.
Tags: Robot Robots

Tesla Bot Was Created by Elon Musk to Ensure Safety in All Robots, Present a Good AI to the World

Dyson Patents Stair Climbing Vacuum Robot | Will the Robot Ever Come Out?