ASKAP (Australian Square Kilometer Array Pathfinder), a sensitive space telescope of Australia, detects a mysterious repeating radio signal in the Milky Way Galaxy's center. Involved astronomers said that they were able to receive this unknown radio wave around 13 times between April 2019 and August 2020. 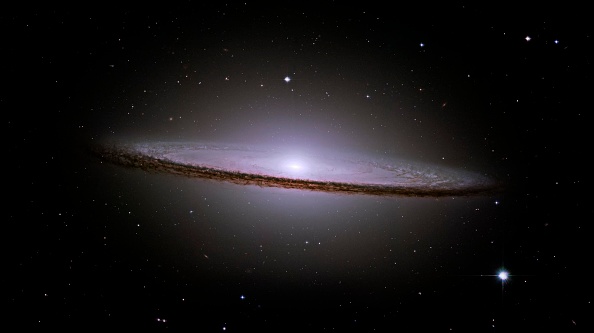 (Photo : Photo by -/NASA/HHT/AFP via Getty Images)
This NASA Hubble Heritage Team image released 02 October, 2003 shows the Sombrero Galaxy. HHT astronomers, who assemble many of the NASA Hubble Space Telescope's most stunning pictures are celebrating their five-year anniversary with the release this image. One of the largest Hubble mosaics ever assembled, this magnificent galaxy is nearly one-fifth the diameter of the full moon.

However, they were not able to detect it again, which prevented them from further observing the radio signal to know its origin and existence. Because of this, space experts are now confused about the actual source of the radio signal.

NASA explained that radio signals usually come from astronomical objects, which have to change magnetic fields that produce radio waves. The National Aeronautics and Space Administration's WAVES, a radio astronomy instrument, usually detects radio signals coming from the Sun and other planets within the solar system.

Aside from stars and other heavenly bodies, space experts also explained that nebulas, quasars, and pulsars are also among the most common sources of radio signals. However, the latest mysterious repeating radio signal seems to be not coming from them.

According to Slash Gear's latest report, the involved Australian space researchers said that the mysterious repeating radio signal they detected is not a pulsar, a low-mass star, or even a fast radio burst.

(Photo : Photo by AHMAD GHARABLI/AFP via Getty Images)
This long-exposure picture taken early with a fish-eye lens early on August 20, 2020 shows a view of the Milky Way galaxy rising in the sky above the Judaean mountains (R) and the Dead Sea (L) in the occupied West Bank between Palestinian Jericho and Israel's Ein Gedi.

Aside from its unknown origin or form, ASKAP astronomers also confirmed that the repeating radio signal, which is now called ASKAP J173608.2-321635, will appear very bright in the radio system for weeks. After that, it would suddenly disappear within around 24 hours.

On the other hand, the Australian experts added that the behavior of the new radio wave also doesn't fit any recorded celestial body types.

Since this is the case, they believe that this signal could represent a new class of space objects, which could be discovered via radio imaging.

In other news, NASA James Webb's December launch date is now confirmed. On the other hand, an astrobiologist claimed that space viruses could exist but are harmless to humans.

Other Details of the Repeating Radio Wave

Express UK reported that the new study, which Ziteng Wang leads, states that the repeating radio signal could be a highly polarized, variable radio source.

On the other hand, the involved University of Sydney researchers explained that there's a high possibility it came from the center of the Milky Way Galaxy, which is still an unexplored area.

Aside from these, astronomers also said that it does not appear when they are using other types of space telescopes, such as the Chandra X-ray Observatory and the Swift Observatory, which can pick up near-infrared wavelengths.

For more news updates about the repeating radio signal and other space-related stories, always keep your tabs open here at TechTimes.