Here are the best Chromebooks to buy in 2021, which includes the Acer Chromebook 713, and the Lenovo Chromebook Duet--to name a few. 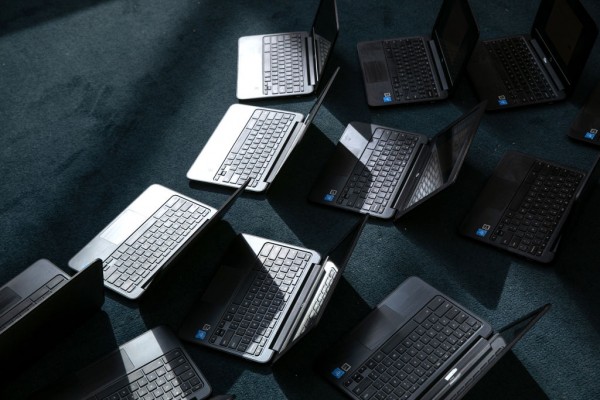 (Photo : by John Moore/Getty Images)
STAMFORD, CONNECTICUT - AUGUST 31: Chromebooks lie out after being cleaned in preparation for the Sept. 8 start of school at Newfield Elementary School on August 31, 2020 in Stamford, Connecticut.

Today, Chromebooks do not only run some Google apps on a laptop. The best ones could do most of an average user's daily computing needs. The top-performing models could even edge out some Windows and even macOS machines.

It is worth noting that each user has unique varying needs and wants. So, what might be the top pick for one person, may not be the perfect choice for another.

As such, the list will include the best Chromebooks from different categories, such as performance, portability, and price.

Best Chromebooks to Buy in 2021

To cut to the chase, here is the only list you'll be needing if you're buying a Chromebook in 2021.

As per Android Central, this Chromebook tablet features a 10.1-inch touchscreen display packed with 400 nits, which is bright enough for some video streaming.

A MediaTek Helio P60T powers this Chromebook, along with 4GB RAM and up to 128GB of internal storage.

For its battery life, the tablet could last up to 10 hours on a single charge.

Its $249 price tag makes this the perfect Chromebook for those who are on a budget.

According to The Verge, this detachable Chromebook is the Asus version of Lenovo's tablet earlier, the Chromebook Duet.

To start, the Asus Chromebook Detachable CM3 carries a 10.5-inch display, similar to the Lenovo's. Not just that, this device comes with a kickstand and keyboard as well.

However, the difference between the Duet and Detachable CM3 starts with the price of the latter at $370.

Meanwhile, its average battery life could last up to 13 hours of continuous use.

This Chromebook is far from the previous two in the list as it sits in the midrange, flaunting a $1,000 price tag, stylus, and an OLED display.

The downside of the OLED of the Chromebook 2 is that its battery life has suffered, clocking at seven hours only.

Meanwhile, its Intel Core i3 under the hood may not be the faster processor out there, but it still does everyday tasks fine.

Google's version of the Chromebook sports an Intel Core i7, along with 16GB of RAM and 256BG of storage at the price of $649.

Its battery is the best in class in the list, achieving 12 hours of continuous usage, which is paired with a 45W charger support.

The integration of the Google Assistant along with ChromeOS also sets this machine apart from the others, making it the best for its features.

Read Also: Samsung Galaxy Chromebook Go with LTE Pre-Order Opens in the US at $349-Here's How to Pre-Order

And lastly, the best overall Chromebook is by Acer due to its performance.

The Chromebook Spin 713 is packed with Intel Core i7, 16GB, and up to 256GB of storage. Meanwhile, its touchscreen display is 13.5 inches. And as for its battery, it could last for about 10 hours of usage.