The one-day competition saw top content creators and Esports professionals in the global PUBG scene battle it out on the exclusive new Taego map of PUBG: BATTLEGROUNDS. KRAFTON and LifePack launched the event to raise awareness and resources for LifePack - an innovative new initiative that leverages the power of the video game industry to help provide for children in need by providing them with life-saving Ready to Use Therapeutic Food (RUTF) packets. 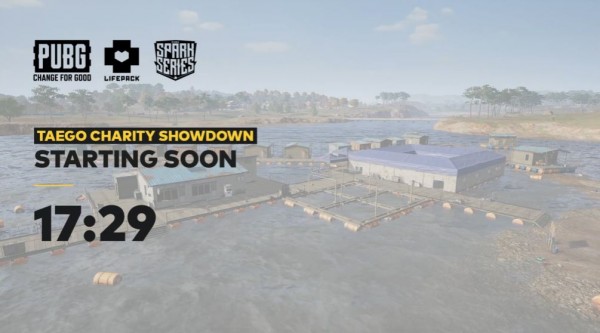 Fans all around the world were able to watch The Taego Charity Showdown through the official PUBG: BATTLEGROUNDS Twitch Channel last Friday, starting from 4:00 PM PDT/ 7:00 PM EDT, with the event running for more than four hours. Additionally, those who watched the live-streamed event were able to receive Twitch Drops. Ten in-game Contraband coupons were given to those who watched the stream for 30 minutes, and those who watched for a full hour were rewarded with the in-game cosmetic item Blackpink headset mic. Also, the organizers of the tournament gave away exclusive commemorative LifePack T-shirts during the stream.

Proceeds raised from the tournament, produced in partnership with Spark Series, will go directly to LifePack to support its mission of helping one million children currently at risk of dying from malnutrition. Every 25 cents raised is already equivalent to a RUTF packet given to a child in need. For a child on the brink of death can be saved with three packets a day for six to eight weeks.

KRAFTON Inc. is a creative collective of different indie game development studios brought together to create the next level of innovative and engaging entertainment experiences for all gamers worldwide. The collective currently includes PUBG Studios, Bluehole Studio, RisingWings, Dreamotion, and Striking Distance Studios - each with their own specialization in the development of gaming apps.

The collective is currently responsible for some of the world's top entertainment properties such as The Callisto Protocol, PUBG: NEW STATE, TERA, ELYON, and PUBG: BATTLEGROUNDS. As a technology-driven firm with world-class capabilities, KRAFTON further seeks to expand its areas of business beyond games and branch out to multimedia entertainment and deep learning.

LifePack is an initiative that aims to unite the video game industry to end life-threatening malnutrition, which remains one of the top causes of death in children. The initiative is intended to work anywhere: across any genre, any game, any platform - all in pursuit of its vision of raising resources for its cause through in-game transactions.

THe LifePack initiative was first developed by the Eleanor Crook Foundation and hive to rally the gaming community to save one million lives.