Chinese astronauts dubbed the Shenzhou 12, have made their comeback to Earth from their 90-day space station mission, making it the longest crewed spaceflight mission of China. 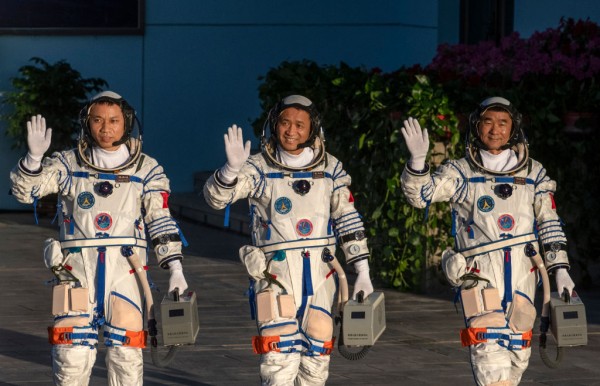 (Photo : by Kevin Frayer/Getty Images)
JIUQUAN, CHINA - JUNE 17: Chinese astronauts from China's Manned Space Agency, left to right, Tang Hongbo, Nie Haisheng, and Liu Boming wave at a departure ceremony before launch of the Senzhou-12 at the Jiuquan Satellite Launch Center on June 17, 2021 in Jiuquan, Gansu province, China. The crew of the Shenzhou-12 spacecraft will be carried on the Long March-2F rocket launched to the space station China is building from the Gobi Desert marking the country's first manned mission in nearly five years.

The three Chinese astronauts went to the unfinished new space station of China last June 16, seven hours after their launch.

The Shenzhou 12 landed at the Tianhe, also known as the Harmony of Heavens, the core module of the Chinese space station.

The crew of the space station mission is composed of Nie Haisheng, Liu Boming, and Tang Hongbo.

The three astronauts were able to book a milestone that is three times longer than the longest crewed mission of China, according to Space.com,

It is worth noting that the return of the Shenzhou 12 to Earth did not occur in a single day.

In fact, the return began on the evening of Sept. 15, wherein the spacecraft detached from the Tianhe module, as per the statement of the China Manned Space Engineering Office, or CMSEO.

After that, the three astronauts had to perform a rendezvous test with the core module of the space stations that concluded on Thursday, Sept. 16.

And on Sept. 17, the spacecraft carrying the entire space mission crew has finally landed back on Earth's surface.

To be precise, the historic mission of the Shenzhou finally concluded on 1:34 am Friday, Sept. 17, at the Gobi Desert in Inner Magnolia, marking the return of the crew on Earth.

The Shenzhou 12 visited the unfinished space station of China that is said to be done at least before 2022 comes to an end.

China is creating its own version of the International Space Station, or ISS, after the United States blocked the Asian country from working with NASA, or the National Aeronautics and Space Administration.

It is worth noting that the space station that China is working on is the only counterpart of the ISS out there. The latter is retiring in 2024, and by that time, the Chinese space station is expected to be finished.

As per Reuters, China has already revealed plans for the Asian country's next crewed mission to the Tianhe space station module.

The next crewed spaceflight mission will be called Shenzhou-13. What's more, China is expecting to break the recent milestone that the Shenzhou-12 have achieved.

The Chinese nation has a goal of letting the next batch of astronauts stay in Tianhe three months longer than the previous group, which recently landed on Earth.

The second crewed mission in Tianhe is expected to launch the following month or by October.

But before the arrival of the next crew, China will first bring their automated cargo spacecraft that goes by the name Tianzhou-3 to the space station core module, transporting the incoming crew's essential supplies.

The news outlet further noted, citing the state media of China, that the automated cargo spacecraft for the crew supplies will be launching "in the near future."