The leaked model is reportedly the successor of the current TicWatch Pro 3 GPS.

The Italian YouTuber has not mentioned the full specs of the product, but he has noted some important features of it. 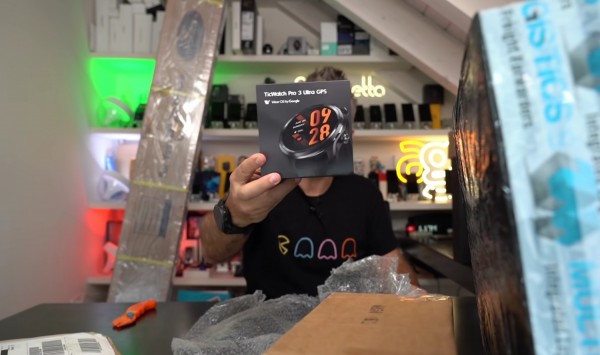 Earlier this week, Android Central spotted that there is an unusual TicWatch model revealed by Galeazzi on his channel. The Italian tech expert confirmed the said model, but somehow it is unavailable at the moment.

Mobvoi has not yet officially announced if it would release TicWatch Pro 3 Ultra GPS. But, the latest unboxing video proved that it would be available soon.

According to Galeazzi, the alleged Mobvoi smartwatch is equipped with the same processor that Gen 6 Fossil watches have.

It has reportedly a Snapdragon Wear 4100+ support to house advanced features. Somehow, a similar SoC could be the next big thing for the watchmaker since the previous chips only featured the Wear 4100.

The new chip is said to sport an Always-on Display functionality (AoD), which aims to lessen the power usage of the smartwatch.

Mobvoi aims to create a product that could be used for a long period.

Besides revealing about the Pro Ultra 3 GPS' Snapdragon Wear 4100+ processor, Galeazzi also said that its design was strikingly close to the appearance of the TicWatch Pro 3 Ultra and TicWatch Pro 3.

Moreover, the tech YouTuber indicated that the leaked Mobvoi smartwatch is a military-certified product.

Apart from that, we could notice that its case is made out of stainless steel or aluminum, according to a report by Notebook Check.

Judging from its display, the ridged edge is noticeable from the video.

Another feature that we note about this TicWatch model is its small display bezels that could happen by chance. We do not know if Mobvoi intentionally ended up with it, or if it is a part of their marketing strategy.

At the time, Galeazzi's video showed us that the new Mobvoi wearable is already on the way. The TicWatch Pro 3 Ultra GPS could make or break its entrance to the market.

The short clip might be a spoiler for smartwatch fans, but it's good that a potential next-gen model has interesting specs to present.

Amazingly, the TicWatch Pro 3 Ultra GPS has been a surprise for smartwatch enthusiasts. Mobvoi is indeed looking after the welfare of the users who value wearables.

In April we reported that the firm has confirmed the launch of the TicWatch GTH. For under $100, you can now use its health-related features such as sleep tracking capability, temperature monitoring, and pulse oximetry sensors.

Three months later, Mobvoi announced that those who were interested in buying TicWatch E3 could have a complete refund of that.

The willing participants should join the HIIT workout challenge and they should finish it by the end date. There were corresponding rewards for each progress.

Related Article: Google Wear OS 3 Update: Should You Wait Until 2022 to get a Compatible Smartwatch?