iPhone 13’s Inside Gets a First Look with Visible Changes Like Battery, TrueDepth System, MORE

iPhone 13's inside has its first look already even before the new Apple flagship starts reaching its future users on Sept. 24. 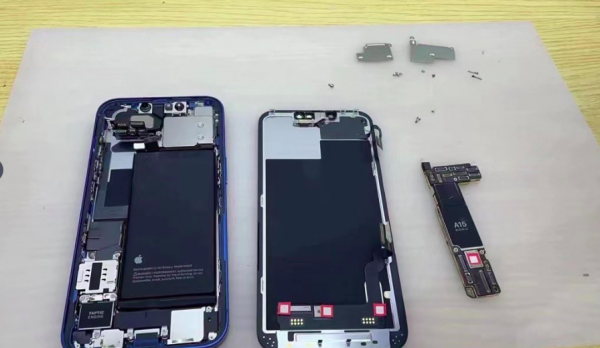 (Photo : screenshot from Sonny Dickson Twitter account )
iPhone 13’s inside gets its first look with visible changes like the larger battery, new TrueDepth System, and more a day before the new Apple device starts shipping.

The first peek on the internals of the next-gen iPhone was thanks to the photo that a leaker named Sonny Dickson shared on his Twitter account.

As per 9to5Mac, this will do for now before the e-commerce and repair platform, iFixit, shares its comprehensive teardown of the iPhone.

The teardown has been the routine of the repair firm for the newly launched devices of the Cupertino giant.

The outlet further noted that there are five notable visual changes on the latest iPhone from its predecessor, the iPhone 12.

Meanwhile, according to MacRumors, the first look of the smartphone internals is likely from the iPhone 13 or its sibling, the iPhone 13 mini.

One of the most visible changes in the iPhone 13's internals is the larger battery size.

During the launch of the new Apple flagship device, the iPhone maker touted that the new smartphone boasts a longer battery life than its previous generation of up to 2.5 hours more.

To be precise, the stats from Apple further revealed that the iPhone 13 sports a 12.41 watt-hour battery, which accounts for an increase of 15% from the previous model.

On the other hand, the older iPhone 12 only featured a 10.78 watt-hour battery.

Apple further highlighted that the longer battery life of its new device is thanks to the collaboration of the new A15 Bionic chip and the larger battery, which was seen in its inside's first look.

On top of that, one of the design changes in the iPhone 13 is a smaller notch, which gives the status bar more space but still lacks the battery percentage info.

It is to note that Apple announced during the debut of the new smartphone that the notch of the latest device is 20% smaller than its predecessor.

Now, the selfie or front-facing snapper has moved its location on the left side.

In addition, Apple pushed both the infrared camera and the dot projector to the right side. Meanwhile, the earpiece has found its way to the top bezel of the device.

With all of that, the new iPhone got a slightly smaller notch.

Read Also: How To Choose Between iPhone 12 and iPhone 13? Deciding Factors You Need Before Purchasing One

What's more, the Taptic Engine of this year's iPhone also saw a visible change. It significantly reduced its size when compared to the previous phone.

MacRumors suggested in the same report that the move to make it smaller is likely to give space for the increased battery size.