Released as a free-to-play game, Pokémon TCG Live also marks the first Pokémon TCG experience comes to smartphones, aside from tablets, Macs, and PCs. The announcement comes as The Pokémon Company International moves along its year-long celebration of the franchise's 25th anniversary by engaging fans with innovative Pokémon products and experiences. 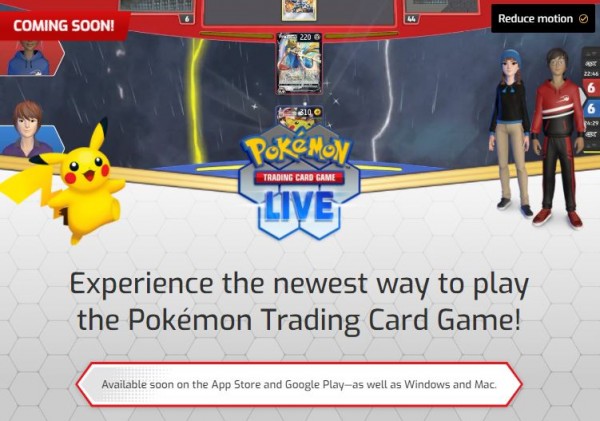 "As we look back on 25 wonderful years of Pokémon, we are once again reminded of how the Pokémon Trading Card Game has always been a strong pillar of the franchise and beloved by young and veteran Trainers alike," says Pokémon TCG Vice President Barry Sams.

He also explains that the new app will go hand in hand with the tabletop version that has been a worldwide phenomenon, welcoming the new era of digital play that allows Trainers to play together regardless of platform.

With Pokémon TCG Live, players will compile and collect Pokémon trading cards and build their fun and exciting decks. New cards can be received by scanning code cards, purchasing in-game booster packs, completing daily quests, and more. Players can then play against other trainers from other parts of the world, with the game set to launch in multiple languages: English, German, French, Spanish, Italian, and Brazilian Portuguese.

Pokémon TCG Live is also designed to be easy for beginners to learn and enjoy the card game while offering new and fresh challenges for experienced players to test their skills and further improve in the game. It retains almost every activity in the original Trading Card Game - building decks, collecting cards, and battling with other Trainers all around the world - and more in its mobile version. Players will also be able to personalize further their experience with customizable avatars and unique Pokémon TCG accessories. They can also join in regular events and daily quests. The Pokémon Company International also assured fans that the game will continue to be updated with new features after launch.

Pokémon TCG Live is set to arrive soon for supported Android and iOS devices and Macs and PCs through Pokemon.com. Lucky trainers looking to preview the game before its general release will be able to join in the mobile soft launch later this year, set on Canada, plus a global open beta for Macs and PCs.

The Pokémon Company International is a subsidiary of The Pokémon Company based in Japan. The company manages the property outside Asia and covers brand management, marketing, licensing of the franchise: the Pokémon Trading Card Game, the animated TV series, other home entertainment materials, and the official Pokémon website. Pokémon was originally launched in Japan in 1996 and has remained one of the most popular children's entertainment properties globally. The franchise includes TV shows, films, official soundtracks, trading cards, and other merchandise.