LEONARDO is a Drone That Can Walk andd Fly from Caltech, and It Is Somehow Scary

LEONARDO is a new drone from Caltech, and it is from its researchers from the Center for Autonomous Systems and Technologies, which is a hybrid robot that can walk and fly. Yes, you heard that right, as the drone has two legs that are bipedal when it walks and has its propellers on its arms so that it can fly. 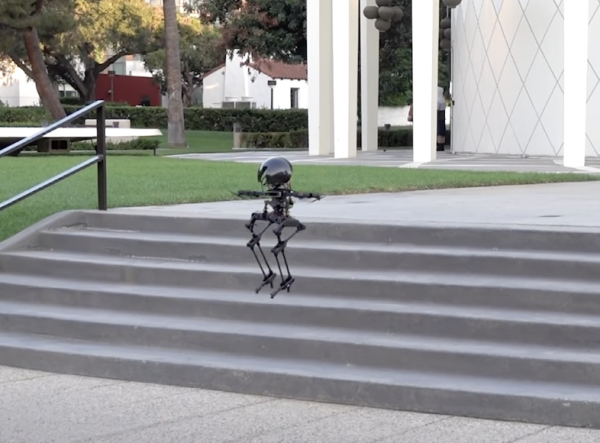 "Walk the talk and fly the skies" maybe something that the LEONARDO boasts of, but it is still a new sight for people to see, as it debuts a robot that looks like a regular one but does things unexpectedly. Caltech has named the drone "LEONARDO" or simply "LEO" because it is short for "LEgs ONboARD drOne."

The hybrid drone has no significant features yet, as it is still an experimental device from the researchers, including that of Caltech's Soon-Jo Chung, who is also a Bren Professor of Aerospace and Control and Dynamical Systems.

The drone can walk, hop, and fly, and this motion is similar to birds which can do all three, as well as stay atop electric lines.

The hybrid drone may be a novel take, and it shows a new design for drones soon coming to the world, but it still has functions and features which make it a regular drone. It is both the eVTOL motion or electric vertical takeoff and landing.

Moreover, the LEONARDO is meant to skateboard and walk on slacklines, as well as be the prototype for human jet suits that may soon be a venture.

Drones in the Present

Other drones do not come close to LEO. Why is that? Because LEO is one of a kind and is the only flying drone slash robot slash hybrid on the face of the earth. Other drones that can fly looks like a mini plane or what the drone had looked like since its initial introduction to the public when people first embraced it.

Drones from companies like DJI with its FPV or the small and compact drone, that aims to give a massive performance against its competitors, and a VR experience. And other drones like Sony's take with the Airpeak that is the first release of the multinational conglomerate, equipped with Sony lenses for a superb experience.

No other drones come close, and other bipedal robots have no propeller for arms and a lightweight body that can fly from one point to another.

LEO still has no specific purpose out there, as it cannot carry heavy objects, transport things from one point to another due to its lack of hands, but it still can provide a massive point for study, especially as it resembles a bird that can walk and fly.

Related Article: Chinese Military Researchers Might Have Cracked the Possibility of Landing a Hypersonic Drone