Shenzhou 13's Wang Yaping has become China's first ever female astronaut to do a spacewalk. Wang is one of the three astronauts of Shenzhou 13.

Wang went on the spacewalk with mission commander Zhai Zhigang. The spacewalk of the two astronauts was expected to last six hours. 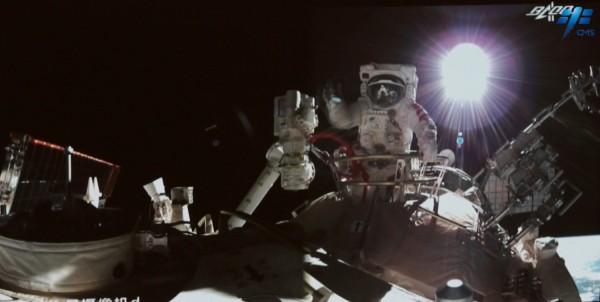 (Photo : Screenshot taken from the website of the China Manned Space Agency )

The China Manned Space Agency (CMSA) has shared a photo of the spacewalk via its official website.

Zhai is also a history-making astronaut as he is the China's first-ever astronaut to go on a spacewalk.

China's Shenzhou 13 mission was then launched on the 15 of October. Its three crew members, Wang Yaping, Zhai Zhigang, and Ye Guangfu, arrived at the Tianhe space station module for a couple of hours after the launch, according to the report by Space.

Zhai Zhigang is the mission commander. The Shenzhou 13 mission is then expected to last for six months. It is Ye Guangfu's very first mission to space.

According to the report by Space, the Shenzhou 13 astronauts "have successfully transferred the supplies from the Tianzhou cargo spacecraft docked with Tianhe, including the carrying out of maintenance, performing daily exercises to counter the effects of microgravity and conducting medical examinations and scientific experiments" in the past three weeks that they have been in the space.

The Shenzhou 13 mission was launched after the successful return to Earth of the Shenzhou 12 astronauts.

Tang Hongbo, Nie Haisheng, and Liu Boming returned to Earth in September at the end of their 90-day mission. The Shenzhou 12 mission was launched in June.

While in the outer space, President Xi Jinping was able to make a call to the Shenzhou 12 crew members. The astronauts were also able to share about their life in space, including the food and drinks they had available while in Tianhe.