NASA has recently started terrain tests on the OPTIMISM Mars rover, the "twin" to the Perseverance rover.

(Photo : GREGG NEWTON/AFP via Getty Images)
The airplane carrying US Vice President Mike Pence arrives at the Kennedy Space Center in Florida on May 27, 2020. - Pence and US President Donald travelled to Florida to see the historic first manned launch of the SpaceX Falcon 9 rocket with the Crew Dragon spacecraft, the first to launch from Cape Canaveral since the end of the space shuttle program in 2011.

As per the NASA website, the Perseverance twin rolled on over to the aptly named Mars Yard on the agency's Jet Propulsion Laboratory, located in Southern California.

There, OPTIMISM (Operational Perseverance Twin for Integration of Mechanisms and Instruments Sent to Mars) will perform all the things that it is more well-known twin on Mars does: rollover boulders, collect rock samples and store them, and everything else.

The purpose of the run is to ensure that Perseverance, which is millions of miles away, will execute the control commands from Earth flawlessly. With that, think of Optimism as some sort of a test rover which NASA tests things on first to make sure that Perseverance does its job well.

Aside from the terrain test run, OPTIMISM will also help identify any potential problems that Perseverance might face on the Red Planet, according to the Jet Propulsion Lab. Here is a video of OPTIMISM made shortly before Perseverance's launch:

As of late, NASA has announced that the Perseverance rover has successfully collected its third sample of Martian rock.

The rock was found to contain olivine, a mineral also found on Earth's upper mantle. With the sample, the Mars rover has already collected three major rock samples, which could all reveal more information about the surface of the Red Planet.

OPTIMISM At A Glance

When NASA was planning the Perseverance mission, they had to cover all bases, all to make sure that the rover's mission on Mars goes as smoothly as possible. Thus, OPTIMISM was born.

According to CNN, the rover is a complete replica of Perseverance down to the wheel treads--same hardware, software, controls, and everything else. This makes it the perfect vehicle "test bed" for its twin.

NASA might have a lot of the latest technologies at their disposal, but the fact still remains: they have to remote-control the Perseverance rover from over 2.3 billion miles away. 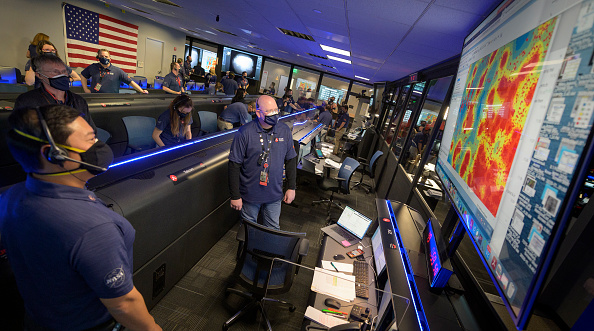 At that distance, there is barely any room for error when it comes to punching control commands. Furthermore, the Mars rover itself costs over $2 billion, according to Planetary.org. If you're driving something that expensive, you'd definitely not want to get it totalled billions of miles away from home.

That is where OPTIMISM and the NASA JPL Mars Yard comes in and why its recent terrain test is critical to the future success of its twin.

So far, Perseverance is deep into its mission to explore the Jezero Crater, where it originally landed over a year ago.

Its main goal there is to look for potential signs of life in what NASA believes is an ancient delta--formed when rivers enter large bodies of water, depositing rocks, sand, and perhaps even layers of organic material such as carbon, reports the BBC.

As for the rock samples, they'll eventually be bound for Earth on a separate "fetch" mission to be launched hopefully around 2031.

How Do NASA Rovers And Probes Communicate With Earth From So Far Away?

New Cheaper Spacecraft Fuel Now Being Tested! Here's How It Can Enhance the Space Industry