"GTA" fans are so starved of "GTA 6" news that they seem to think there's an image from the still-unannounced sequel in the new trilogy remaster.

(Photo : Pavlo Gonchar/SOPA Images/LightRocket via Getty Images)
UKRAINE - 2021/10/05: In this photo illustration a Grand Theft Auto (GTA) logo of a computer game is seen on a smartphone screen.

According to IGN, the alleged image fans think could be from "GTA 6" can be found in the UFO-themed Lil' Probe'Inn in "San Andreas." It is part of a series of pictures decorating the inn.

An original screenshot of the image was posted first in the "GTA" forums by Mussefar. Twitter user Kirsty shared it on social media afterward:

Another #GTATrilogy mystery hunt. The Lil' Probe'Inn has an unidentified house amongst the UFO photo display... GTAVI? (jk) (or am I, where is this from?)

As you can see from the post, the image seems to be the odd one out. That's because it's the photo of a house nestled among all other images of alien spacecraft.

Some fans are thinking that the house's high visual quality, compared to the rest of the visuals in the "GTA" trilogy remaster, is indicative that it could be from Rockstar Games' still-unannounced "Grand Theft Auto" sequel.

Other people delved deeper into the conspiracy. Considering that many rumors say "GTA 6" is set in a modern recreation of Vice City, a "GTA" forums user named igrobar claimed to have found a house in Boca Raton (a location close to Miami, which Vice City is based on) that bears a striking resemblance to the in-game image.

Here is a video discussing the image from YouTuber MrBossFTW:

A lot of people commenting on the original "GTA" forums post say the original poster is reaching. And they may be right.

While it is entirely possible for Rockstar Games (or any other game studio, for that matter) to put subtle hints to sequels in their games, there's also no way to prove it. Furthermore, there's barely any news about "GTA 6" to go on in the first place. 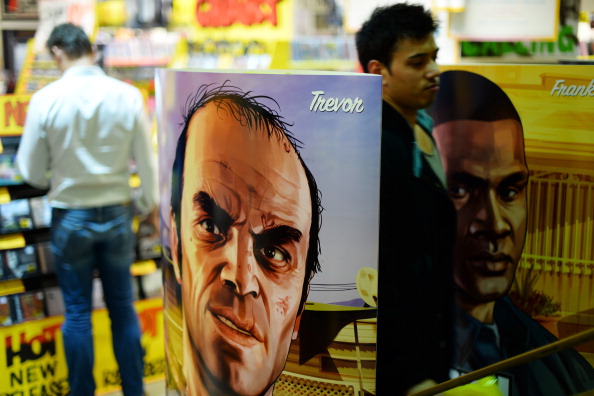 (Photo : SAEED KHAN/AFP via Getty Images)
Customers browse next to the advertisement of console game Grand Theft Auto 5 at an electronics store in the central business district of Sydney on September 17, 2013. At midnight the doors of select games stores were opened for the launch of the much-awaited Grand Theft Auto 5 game in Australia.

What little rumors exist today are almost always convoluted and don't make a lot of sense. One leaker, however, says something that not a lot of "Grand Theft Auto" fans would like: "GTA 6" is in development hell, reports Charlie INTEL.

Development hell means that a game has been in the works for too long--sometimes over a decade at a time. Famous examples include "Duke Nukem Forever" (which took 15 years to make), and Sony's "The Last Guardian."

The latter, which was initially billed as a PS3 exclusive back in 2009, was only released for the PS4 nine years later.

Here's another bucket of water to douse your fire, "GTA" fans: there's no mention of a new "Grand Theft Auto" game in Take-Two Interactive's future plans. If you didn't know, Take-Two is Rockstar Games' parent company.

Take-Two said they plan to release 62 games in total through 2024, as per a recent company earnings call. Some of the company's core games are there, but "GTA 6" was nowhere to be found.

Related: The 'Grand Theft Auto' Trilogy Remaster Is an Absolute Mess--Is It Among the Most Disastrous Game Launches in History?

The 'Grand Theft Auto' Trilogy Remaster Is an Absolute Mess--Is It Among the Most Disastrous Game Launches in History?