A full solar eclipse has recently come and gone in the Antarctic region, making it a hard-to-spot phenomenon as it was exclusive in the southern region of the planet and not in the mainlands. However, these photos of the eclipse from ISS Astronauts show a special look into what eclipses look like from space, showing the haunting beauty of darkness from the Sun. 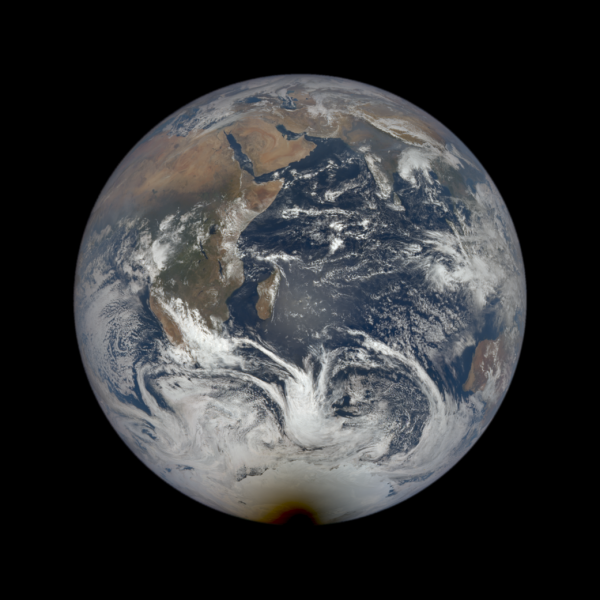 (Photo : NASA)
This image of our home planet shows how Earth looked from more than 950,000 miles, or 1.5 million kilometers, away during the total solar eclipse visible in Antarctica on Dec. 4, 2021. The EPIC instrument on the DSCOVR spacecraft captured the eclipse's umbra, the dark, inner shadow of planet Earth. Shaped like a cone extending into space, it has a circular cross section most easily seen during an eclipse.

NASA has released images of the total solar eclipse that happened in the Antarctic region alone, showing the perspective of a faraway satellite that sees the planet from afar. The instrument used for this sighting is called DSCOVR or Deep Space Climate Observatory spacecraft that has shown how it looks when the Earth is covered by the Moon's shadows.

The image shows a dark or black-ish spot right at the bottom of the home planet, showing the South Pole's Antarctic region to be covered with a shadow of the Moon as it blocks the Sun.

The image is a sight to see, especially as it shows a different perspective on how the Earth looks like when there is an eclipse that is happening, something unseen by people from the surface.

On another note, ISS Astronauts aboard the Expedition 66, as tweeted by Kayla Barron, have also witnessed the Antarctic solar eclipse that the crew had witnessed, also sharing their photos to the public.

"Saturday morning, the Expedition 66 crew squeezed into the Cupola to check out the total solar eclipse that occurred over Antarctica and the Southern Ocean. Here the moon casts an oblong shadow on the Earth’s surface. It was an incredible sight to behold."

It shows a closer view of the shadow that casts over the South Pole as the eclipse is taking place.

ISS Astronauts and Their Mission

Towards the end of November, there have been issues for the astronauts in the ISS, especially as the space has been filled with debris that forbids them to do their supposed "spacewalk" on the spacecraft. Different astronauts that live in the ISS for temporary times are meant to do research and studies regarding the many focuses of people on the planet.

The focus of these astronauts is to discover something that can only be affected or have its result thanks to the many conditions in space that cannot be felt or achieved on the planet's surface. One example would be the monoclonal antibody crystallization of one component, which can thrive and easily create more crystals when in microgravity, a potential cure for cancer.

Despite the hard work done by members of the ISS, they are still entitled to their free and leisure times, something which involves watching a Solar Eclipse from space and seeing how it unravels upon the planet. It is a rare experience for them, especially as it is not a sure thing that the space station is at the right place and time for the eclipse as it orbits.