After Jeff Bezos, Another Billionaire Yusaku Maezawa is Flying to Space—First Self-Funded Mission to ISS?

After Jeff Bezos' space mission, another billionaire, Yusaku Maezawa, is flying to outer space on Dec. 8, ahead of his upcoming trip around the moon of the Earth. 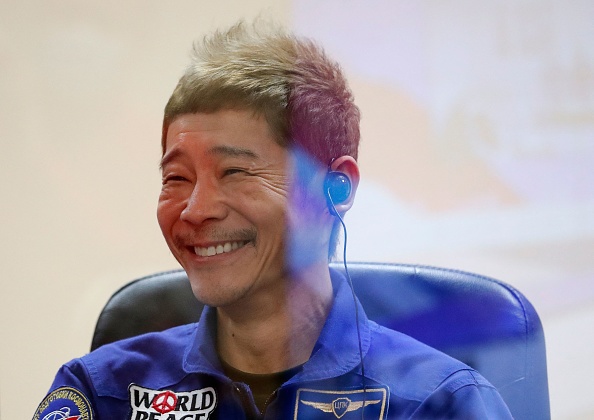 (Photo : by SHAMIL ZHUMATOV/POOL/AFP via Getty Images)
Japanese billionaire Yusaku Maezawa reacts behind a glass wall during a press conference in Baikonur on December 7, 2021. - Space tourists Yusaku Maezawa and his assistant Yozo Hirano, led by Roscosmos cosmonaut Alexander Misurkin, will take part in a mission on the Soyuz MS-20 spacecraft to the International Space Station (ISS) scheduled for December 8, 2021.

Another Billionaire Yusaku Maezawa is Flying to Space

The space mission of Maezawa is not only a monumental flight for himself. It is also the first-ever self-funded space tourism mission, which is headed to the International Space Station.

The Japanese billionaire will fly via a capsule built by Russians that goes by the name Soyuz MS-20 spacecraft at around 2 am in the morning, as per the report by CNN.

The Soyuz rocket will be launching from the spaceport of Russia in Kazakhstan, known as the Cosmodrome.

The spacecraft is scheduled to reach the International Space Station, or shortly known as the ISS, six hours after its launch from the Cosmodrome.

It is worth noting that the Japanese billionaire will not be flying to the space station by himself.

In fact, Maezawa will be joined by a veteran cosmonaut of Russia, Alexander Misurkin, who will serve as the commander of the space mission.

On top of that, the flight will also be joined by the videographer and production assistant of the billionaire, Yozo Hirano. He will be responsible for the photoshoot of the Japanese fashion mogul as he poses while floating around the orbiting ISS.

According to the news story by Engadget, both the fashion mogul and his production assistant are the first space tourists of the aging space station after more than a decade.

However, it is to note that just last October, Roscosmos, the state space firm of the Russian nation, previously flew an actor and a film director as they were shooting for a feature film.

The flight of yet another billionaire to space further shows that civilian trips outside of Earth are rapidly becoming a trend now.

Last July 20, the founder and retired CEO of Amazon, Jeff Bezos, who now owns a space firm, Blue Origin, flew to the orbit of the Earth.

CNN noted in the same report that Maezawa said in a previous statement that he is curious about life outside of the Earth.

The billionaire further said that "I am planning to find out on my own and share with the world on my YouTube channel."

Read Also: Evan Zimmermann and Jeff Bezos Invest in an Anti - aging Biotech Startup that is Focused on Reversing the Ageing Process

The trip of the fashion mogul to the ISS is a mere test run for his upcoming trip around the moon, which is tentatively scheduled for 2023.

The Japanese billionaire, along with his crewmates, is slated to be the first-ever lunar tourist of the Elon Musk-led space exploration firm, SpaceX.